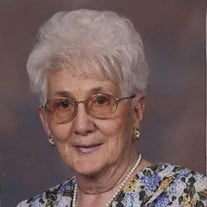 Dorothy Marie Pleiss, 100, of Sioux City, IA died Thursday, December 12, 2019. A Funeral will be held 10:30 AM, Saturday, December 21st at Nativity Church of the Mater Dei Parish (located at 4242 Natalia Way) with Father Daniel Rupp officiating. Burial will follow at Calvary Cemetery. Visitation will be Friday, December 20th starting at 4:00 PM the family will be present from 6:00 PM to 8:00 PM, a prayer service will begin at 7:00 PM at Christy-Smith Morningside Chapel (located at 1801 Morningside Ave). Online condolences may be made to the family at www.christysmith.com Dorothy was born February 27, 1919 in Sioux City, Iowa, to George and Johanna (Abelson) Vilim. She graduated high school in Omaha, NE. Dorothy married Joseph Pleiss Sr. on June 8, 1940 at St. Joseph Catholic Church in Omaha, NE where they made their home prior to moving to Sioux City, IA. Dorothy worked at Mutual of Omaha Insurance while the couple lived in Omaha, Johnson Biscuit as a floor supervisor after moving to Sioux City and later volunteered in the gift shop at Marian Health Center after her retirement. Dorothy enjoyed spending time with her family and extended family. She made very special Christmas stockings for every member of the family. She also loved to embroider dish towels to give as gifts. Dorothy was a wonderful seamstress who could sew or mend anything and make it like new. Dorothy also loved to cook for family celebrations and was the official gravy maker. Dorothy was a member of Nativity Church of the Mater Dei Parish and was a member of the altar guild. Survivors include her daughters, Karen (Bob) Keegan, Janice (Mike) Keegan; grandchildren, Kathy (Jon) Walker, Carol (Rick) Schoonover, Liz (Dennis) Brockhaus, Rob (Carrie) Keegan, Patrick (Janet) Keegan, Tom (Kathy) Keegan, Sarah (Brandon) Smith; 23 great-grandchildren; 37 great-great-grandchildren. Dorothy was preceded in death by her parents; husband, Joseph in January of 1998; son, Joseph Jr. in April of 1977; brother, George Vilim; granddaughter, Lynette Keegan; great-great-grandson, Cadyn Michael Cullenward.

The family of Dorothy M. Pleiss created this Life Tributes page to make it easy to share your memories.

Send flowers to the Pleiss family.