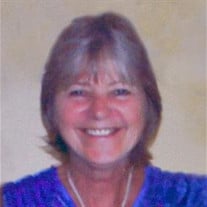 Dorothy A. “Dot” McClure, 65, of Sioux City, died Sunday, December 15, 2019, at Nebraska Medical Center in Omaha, NE. Arrangements are pending with Christy-Smith Funeral Homes, Morningside. A visitation will be 4:00 pm to 7:00 pm Thursday, December 19, 2019, at Christy-Smith Funeral Homes, Morningside. A funeral service will be 10:00 am Friday, December 20, 2019, at Riverside United Methodist Church, with burial to follow in Memorial Park Cemetery. Dorothy Ann “Dot” McClure, the daughter of Richard “Dick” and Lorraine (White) McClure was born August 19, 1954, in Sioux City, IA. She graduated from high school in Jefferson, SD. class of '73. Dot worked various jobs until 1987 when she went to work for Interbake Foods, remaining there for 32 years before retiring in October of 2019. While working there, Dot met the love of her life, Jack Toben. Together they blended their families with love. Dot was a wonderful nurturer and caregiver. She loved to spend time with her children and grandchildren, and attended all of their sporting events. Dot enjoyed spending many hours rummaging for treasures with her dear friends. Her family extended far beyond her household, as she acted as an “adopted” mom for many of the neighborhood children. "Mama Dot" as she was known, would do anything for those she loved. Dot is survived by her husband, Jack Toben of Sioux City; children, Corey Frye of Sioux City and Kyle Frye of Prairie Village, KS; step-son, John Toben of Quanah, TX; step-daughter, Becky Condos of Beaverton, OR; 10 beloved grandchildren; and many other relatives and friends. She was preceded in death by her parents; her daughter, Keli Frye; and step-son, Keith Toben.

The family of Dorothy A. "Dot" McClure created this Life Tributes page to make it easy to share your memories.

Send flowers to the McClure family.