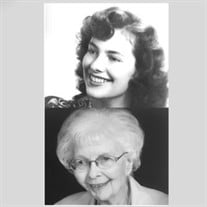 Dorothy May McArthur, 95, lifelong resident of Sioux City passed away surrounded by her family on May 19, 2022, in Sioux City. Funeral services will be at 1:00m PM on Thursday, May 26th at Nativity Church of Mater Dei Parish (located at 4242 Natalia Way) in Sioux City with Rev. Michael Erpelding officiating. Burial will follow at Calvary Cemetery in Sioux City. Visitation will be one hour prior to the service at the church. Dorothy was born on December 1, 1926, in Sioux City to William B. Carr and Katie Mellenbach, she was adopted by Lewis and Helen C. (Mines) Huber. She grew up attending Sioux City Schools, graduating from Central High School in 1946. She married Eugene N. McArthur on July 9, 1947, at St. Boniface Catholic Church in Sioux City. Dorothy was the former manager of the Morningside Dairy Queen and also worked for Woolworth’s in the mid 1960’s to the mid 1970’s. Dorothy was a member of the Nativity Catholic Church, Daughters of the American Revolution, Woodbury County Genealogy Society and the Red Hat Society. Survivors include her daughter Regina “Gina” and her husband Don Hanna of Sioux City, a grandson; Lee Hanna and his wife Joan of Sioux City, three granddaughters; Chaeli and her husband Andy Kohn of Sioux City, Stephanie and her husband Aaron Delair of Sioux City and Rhiannon and her husband Jacob Trierweiler of Sioux City, nine great grandchildren; Nate, Eli, Star, Sadie, Ethan, Elliot, Julia, Nolan, and Clara, 2 sisters; Rita Sebert of Sioux Falls, SD and Sister Ida Hericks of Watertown, SD, several nieces and nephews. Dorothy was preceded in death by her husband Eugene, son Alan, parents and a brother Paul Hericks Family wishes to thank St. Croix Hospice for the wonderful care Dorothy received.

Dorothy May McArthur, 95, lifelong resident of Sioux City passed away surrounded by her family on May 19, 2022, in Sioux City. Funeral services will be at 1:00m PM on Thursday, May 26th at Nativity Church of Mater Dei Parish (located... View Obituary & Service Information

The family of Dorothy May McArthur created this Life Tributes page to make it easy to share your memories.

Send flowers to the McArthur family.