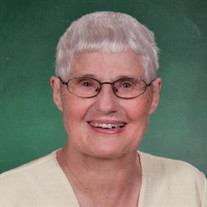 Dorothy E. Lane, 80, died Monday, December 2, 2019 surrounded by her family at MercyOne Medical Center in Sioux City, IA. A funeral service will be at 10:30 a.m., Saturday, December 7, 2019, Riverside Lutheran Church with visitation one hour prior at the church with the family present. Burial will follow in Memorial Park Cemetery. Online condolences can be made to the family at www.christysmith.com Dorothy Elwanda Fristad, the daughter of Richard and Lelia (Strand) Fristad was born April 26, 1939, in Mitchell, SD. She graduated from high school in Mount Vernon, SD in 1957. On October 6, 1957, Dorothy was united in marriage with Kenneth Lane in Letcher, SD. The couple moved to Sioux City in 1965. Dorothy worked at a variety of jobs before retiring in 2001. Kenneth died November 13, 1981. Dorothy was a member of Riverside Lutheran Church, the American Legion in Sioux City, and the Eagles in South Sioux City, NE. She enjoyed reading and traveling, but her family was the most important thing to her. Dorothy is survived by her children, Ronda Quinn of Welcome, MN, John Lane of Sioux City, Richard (My) Lane of Arlington, VA, Lorne (Gail) Lane of Sioux City, Daniel (Tracey) Lane of Vermillion, SD; seven grandchildren; six great-grandchildren; one great-great-grandchild; siblings, Eugene (Mary) Fristad of Mount Vernon, SD, Ilene (Rev. Verne) Carpenter of Colorado, David (Nancy) Fristad of Vivian, SD, Rev. Kalen (Darlene) Fristad of Dows, IA; and many other relatives and friends. She was preceded in death by her parents; husband; siblings, Verlon Fristad and Joyce Peterson; an infant brother, Vincent; and a grandchild, Venesha.

The family of Dorothy E. Lane created this Life Tributes page to make it easy to share your memories.

Send flowers to the Lane family.