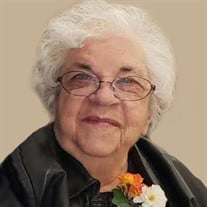 Dorothy Carolyn Carrell, 82, of Sioux City, died Saturday, April 13, 2019, at a Sioux City hospital. Services will be at 10 a.m. Thursday at Morningside Chapel, Christy-Smith Funeral Homes, 1801 Morningside Ave., in Sioux City. Interment will be in Westfork Township Cemetery, Climbing Hill, Iowa. Visitation with the family will be 4 to 8 p.m. Wednesday at the funeral home. Online condolences may be made to the family at www.christysmith.com. Dorothy was born on Dec. 6, 1936, to Myron G. and Esther (Whiteman) Matheny. She grew up in the Climbing Hill area and attended Climbing Hill High School. Dorothy married Marvin D. Carrell on June 7, 1953 in Sioux City. In 1962, the couple moved to California and lived there until moving back to the area in 1970. She worked for Countryside Nursing Home in the housekeeping department for many years, retiring in the late 1990s. Her hobbies included gardening, reading, playing Scrabble, attending Bible study and spending time with her family and friends. Surviving are her children, Debra Carrell of Sioux City, Randall Carrell and his fiancee, Rita Whitmore of Sioux City, Laura Auen of Sioux City, and Rebecca Kelly (Joe) of Elizabethtown, Ky.; 11 grandchildren, Jessica, Jed, Clifford, Mandy, Kevin, Dustin, Amanda, Kendra, Aaron, Zachary and Morgan; and several great-grandchildren. She was preceded in death by her parents; two sons, David and Dwaine Carrell; and two brothers, Donald and Warren Matheny.

The family of Dorothy Carolyn Carrell created this Life Tributes page to make it easy to share your memories.

Send flowers to the Carrell family.