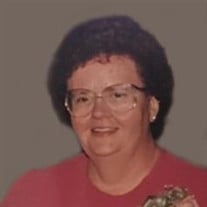 Dorothy Anne Boston, age 78, of Sioux City died on January 27, 2020 at a local care facility. Memorial services will be held Friday, July 31, 2020 at 11:00 a.m. at Christy-Smith Morningside Chapel, 1801 Morningside Avenue, Sioux City, City, Iowa with inurnment following at Graceland Park Cemetery. Visitation with the family present will be held one hour prior to the service. Dorothy was born in Sioux City on March 1, 1941, the daughter of Arthur Burdette and Dorothy Jean “Griffin” Brown. She attended and graduated from Bronson High School. She grew up in Bronson and spent her retirement years in Sioux City. Dorothy, who went by Anne in her early years, worked for the phone company as an operator and a clerk. After retirement, she enjoyed various part-time jobs including Four Seasons Health Club and Christy-Smith Funeral Homes. She spent many hours volunteering for River-Cade and Goodwill Industries. She was happiest when she was spending time with her friends and family or helping other people. From afghans to washcloths, or scrubbies, if she could make something with her time and talent, she shared indiscriminately. She will be missed for her companionship, friendship, compassion and community involvement. She had been a member of the Elliott Creek Presbyterian Church, as well as Bethel Baptist Church where she was active in Awana for many years. Dorothy is survived by her daughter, Barb Anderson and her husband Bill; four grandchildren, Rachel Anderson (Dan Nordyke), Beth (Dan) Lakin, Luke (Karen) Anderson, all of Michigan, and Aaron Anderson (Autumn Grennier) of California; and six great-grandchildren. She is also survived by her brother, George Brown and his wife, Cathey of Arkansas and her sister-in-law, Diane Brown of Nebraska. She was preceded in death by her mother, Jean; her father, Art; a sister, Meriby; and a brother, Jim.

The family of Dorothy Anne Boston created this Life Tributes page to make it easy to share your memories.

Send flowers to the Boston family.