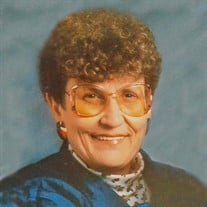 Dorothy Irene Angerman, 90, of Sioux City died Thursday, May 20, 2021, at home, surrounded by her family. Services will be 10:30 a.m., Wednesday, May 26 at Christy-Smith Funeral Homes, Morningside Chapel, 1801 Morningside Avenue, Sioux City, Iowa, with Father Dan Rupp officiating. Burial will be in Memorial Park Cemetery. A visitation will be 5:00 p.m. to 7:00 p.m. Tuesday, May 25 with a prayer service at 7:00 p.m., at the funeral home. Online condolences can be left at www.christysmith.com. Dorothy was born May 29, 1930, in Sioux City, the daughter of Vern and Alma (Voyen) Watts. She grew up and attended Sioux City Schools. She was a lifelong Sioux City resident. She received her LPN Nursing degree and went onto receive her RN Nursing degree. She worked at Gordon Memorial Hospital, Sioux City and South Sioux City Nursing Homes and Doctors offices until retiring at the age of 83. She was of the Catholic faith. She enjoyed spending time with her family, crossword puzzles, watching Jeopardy, casinos, playing cribbage, watching birds, she loved her cardinals, morning doves and hummingbirds. She also loved fishing with dad. The 4th of July get togethers were the highlight of her summer. She was the Matriarch of her family. She is survived by her two daughters and their husbands, Nancy and Rick Wikoff of Marora, Ill. and Kristi and Gregg Parks of Sioux City; nine sons and their wives, Carl and Belinda Angerman of Penrose, Colo., Gerry and Teresa Angerman, and Mike and Tami Angerman, all of Sioux City, Patrick and Jerri Angerman of Castle Rock, Colo., Timothy and Debbie Angerman, Dennis Angerman, Kelly and Kathy Angerman, Rory and Rachel Angerman and Robby Angerman, all of Sioux City; 37 grandchildren; 60 great-grandchildren; 8 great-great grandchildren. She was preceded in death by her parents; her loving husband; her son, Thomas; and grandson, Nathanial.

The family of Dorothy Irene Angerman created this Life Tributes page to make it easy to share your memories.

Send flowers to the Angerman family.