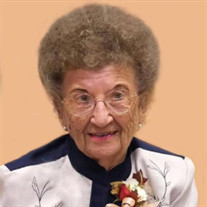 Doris E. Jensen, 94, formerly of Elk Point, SD, died July 23, 2019, at her residence in Champlin, MN. A funeral service will be 1:00 pm Wednesday, July 31, 2019, at Immanuel Lutheran Church in Elk Point with burial to follow in Elk Point Cemetery. Doris Evelyn Davis, the daughter of Bertram and Minnie (Scott) Davis was born June 8, 1925, in Alcester, SD. She grew up on a farm near Elk Point. On July 29, 1940, Doris was united in marriage with Walter “Red” Henke. She was employed at Lindy’s Café, the Elk Point Movie Theatre, and then became the bookkeeper for her husband’s business at Red’s Auto Clinic. Red died October 14, 1967. On August 13, 1968, Doris was united in marriage with Clayton James. They moved to Grass Valley, CA, where she worked as an apartment manager. Her final career was a representative for Avon, which she did for many years. After Clayton died, Doris married Wayne Jensen on October 6, 1989. After Wayne’s death, she moved to Champlin, MN, where she lived with her daughter, Theresa Talbott, and favorite cat, Daisy. Doris was a former member of Immanuel Lutheran Church in Elk Point. She enjoyed golf, square dancing, and gambling in Deadwood, SD. Doris liked to watch the Minnesota Twins play baseball and play the marble game “Wahoo!”. Doris is survived by her children, Theresa Talbott of Champlin, William “Bill” (Connie) Henke of Summerset, SD; six grandchildren; 11 great-grandchildren; and four great-great-grandchildren; siblings, Walter (Bunny) Davis of Vermillion, SD, Phyllis Solem of Spink, SD; and many other relatives and friends. She was preceded in death by her parents; three husbands; and a brother, Floyd Davis.

The family of Doris E. Jensen created this Life Tributes page to make it easy to share your memories.