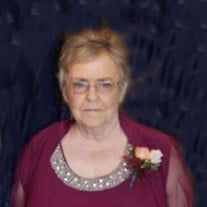 Donna Mae (Cooley) Wetrosky, 78, of Sioux City, IA was called home peacefully to her Lord and Savior on June 16, 2022. Services will be held on Friday, June 24, at 10:00 AM at the Christy-Smith Morningside Chapel in Sioux City, IA following her Burial in Memorial Park Cemetery. Visitation will be held on Thursday June 23, at the Christy-Smith Funeral Home Morningside Chapel from 4:00-7:00 PM. Donna was born September 25, 1943, in Green Bay, Wisconsin to Jess James and Lucille Hattie (Nelson) Cooley. She grew up in Sioux City and graduated from East High School in 1961. After high school, she married Phillip B. Wetrosky and they had three children. The marriage ended in divorce and she never remarried. Donna worked at Zenith until it closed in 1977 and then went to work for IBP. Donna started her studies to become a government meat inspector and then worked for USDA for 30 years before retiring. While working for the USDA she also acted as the Treasurer for local Union 769. After retirement, Donna worked various part time jobs to keep herself busy. Donna was a firecracker, and she was tough as nails. She had a huge heart and would do anything for her family and friends. She loved family get togethers and seeing her grandchildren. She enjoyed going out to eat and shopping. She also enjoyed planting flowers around her home and anything that had to do with home improvement. Donna is survived by her sister, Jessie (Richard) Lukowicz; her children, Susan (Sean) Murphy, Cathy (Dale) Nysven, Ken Wetrosky; three grandchildren, Nick (Sara) DeAnda, Courtney (Andrew) Wilson and Bailey Nysven; and one great-grandchild, Rowyn Ann Wilson. She is preceded in death by her parents, Jess James and Lucy Cooley; a sister, Diane Fredricksen; two brothers, Robert Cooley and Wilbert "Butch" Cooley; and three half-brothers, Richard, Wayne and Ron Cooley. Pallbearers will be her grandson, Nick DeAnda, grandson in-law, Andrew Wilson, nephew, Rick Lukowicz and his son Jared Lukowicz.

Donna Mae (Cooley) Wetrosky, 78, of Sioux City, IA was called home peacefully to her Lord and Savior on June 16, 2022. Services will be held on Friday, June 24, at 10:00 AM at the Christy-Smith Morningside Chapel in Sioux City, IA... View Obituary & Service Information

The family of Donna Mae Wetrosky created this Life Tributes page to make it easy to share your memories.

Send flowers to the Wetrosky family.