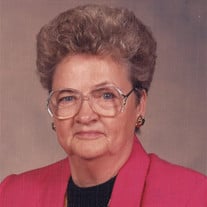 Donna Darlene Turner, 92 of Sioux City, Iowa died on Monday, January 20, 2020, at a local care facility. A Funeral service will be at 11:00 AM on Friday at Christy-Smith Funeral Homes, Larkin Chapel located at 2320 Outer Drive Sioux City, IA 51104 with the Rev. Jim Wilson of Glendale Baptist Church officiating. Interment will be in Memorial Park Cemetery, Sioux City, IA. Visitation will begin at 4:00 PM and the family will be present starting at 6:00 PM. A prayer service will be held at 7:00 PM on Thursday, January 23, 2020, at Christy-Smith Funeral Homes, Larkin Chapel, 2320 Outer Drive, Sioux City, IA. Online condolences may be made to the family at www.christysmith.com Donna was born February 19, 1927 in Sioux City, Iowa to Byron G. and Nina V. (Berg) Spear, Sr. she was one of six children. She met Lencel "Pat" Turner and they were married June 11, 1945 in Sioux City, IA where they lived happily ever after. In the early 1960's Donna began working for Gerkin Windows and Doors. She was ultimately promoted to foreman becoming the first woman to hold that position. Donna retired from the company in 1987. Pat and Donna started to travel the country in their motorhome during retirement and enjoyed spending winters in southern Texas. Donna also enjoyed boating on the Missouri River, gardening and doing yard work. She was a member of Glendale Baptist Church, ladies’ Auxiliary at church and was a member of the Order of the Eastern Star. Donna returned to work in the early 1990's preparing and serving food samples at Hy Vee until 2014. Surviving are three children, John (Patricia) Turner, Patrick Turner, and Judy Turner, all of Sioux City; grandsons and granddaughters, great-grandsons and great-granddaughters and four great-great grandchildren who gave her the nickname "GiGi"; a sister, Norma Gwinn; and a sister in-law, Ruth Spear; along with many nieces and nephews. Donna was preceded in death by her parents; husband; two brothers, Jim Spear and Byron Spear Jr; two sisters, Caroline Cooley and Margaret Dagle.

Donna Darlene Turner, 92 of Sioux City, Iowa died on Monday, January 20, 2020, at a local care facility. A Funeral service will be at 11:00 AM on Friday at Christy-Smith Funeral Homes, Larkin Chapel located at 2320 Outer Drive Sioux... View Obituary & Service Information

The family of Donna Darlene Turner created this Life Tributes page to make it easy to share your memories.

Send flowers to the Turner family.