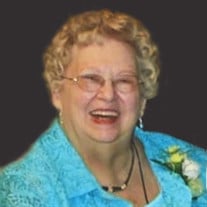 Heaven gained another beautiful angel on Saturday, Oct. 27, 2018, when Donna Gupton, 82, of Marcus, formerly Sioux City, entered into rest surrounded by her family. Services will be 1:30 p.m. Wednesday at Morningside Chapel, Christy-Smith Funeral Homes, with Chaplain Larry Ostercamp of Cherokee Hospice, officiating. Burial will be in Memorial Park Cemetery. Visitation will be 11 a.m. until service time Wednesday at the funeral home. Donna Mae (Hummel) Gupton was born on Nov. 24, 1935, in Sioux City, to Al and Irma (Boesche) Hummel. She attended Sioux City Schools and graduated from East High School in 1954. She married a military man, Maurice Allan, in 1957. They moved to Alaska where their daughter Dixie was born on March 2, 1959. They moved back to Sioux City, where Donna worked many years at River City Outdoor Advertising Sign Company, and crafting beautiful ceramics for Hummels Ceramiland close to 40 years and at the Spencer Fair 25 years. After retirement, she kept busy traveling, playing cards, quilting, knitting mittens, and was an active member of the Izaac Walton League of America. She attended St. Luke Lutheran Church in Sioux City and later Meriden Evangelical Free Church in Meriden, Iowa. Donna dedicated her life to her daughter, grandchildren and great-grandchildren. She never stopped teaching us how to be better people and most importantly, to laugh. As the years went by she moved to Ponca, Neb. and later to Cleghorn, Iowa both times to be closer to her pride and joy. When it became time for people to take care of her, she made her final earthly home at Heartland Care Center in Marcus. She immediately became grandma to the entire staff and everyone quickly fell in love with her sharp tongue, sassy German attitude and her love of laughter. Left to cherish her memory is her daughter, Dixie of Lake Nebagamon, Wis.; grandchildren, Jessica (Jim) of Ponca, Michelle of Cleghorn, Rick of Superior, Wis., and Brandi of Superior; great-grandchildren, Nick, Katy, Michael, Dylan, Allissa, Morgan, Aubree, Colton, Liam, Abbie and Sadie; several cousins; and many friends. Anxiously waiting to greet her in heaven are her parents, Al and Irma Hummel; cousin, Mark Richter; and her cherished aunt, Elda and uncle, Harold Richter. A special thank you to the staff at Heartland Care Center who loved grandma Donna and treated her like family and to Hospice of Cherokee for ensuring the final weeks of her life were absolutely incredible. We love you so much grandma. You rest now and keep watch over us until we meet again…and we will keep laughing.

The family of Donna Mae Gupton created this Life Tributes page to make it easy to share your memories.

Send flowers to the Gupton family.