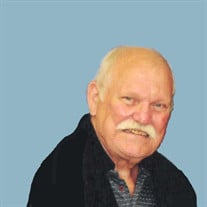 Donald Stokes, age 74, of Sioux City passed away Saturday, December 26, 2020 at a local hospital. Funeral service will be 11:00 a.m. Monday, January 4, 2021 at Faith United Presbyterian Church. Visitation will be held 4:00-6:00 p.m. Sunday, January 3, 2021 with a 6:00 p.m. prayer service at Christy-Smith Funeral Homes, Morningside Chapel located at 1801 Morningside Ave. Sioux City, IA. Burial will be 10:00 a.m. Thursday, January 7, 2021 at Memorial Park Cemetery. Masks and social distancing will be required for the visitation and funeral service. Donald LeRoy Stokes, the son of Harvey Stokes Sr. and Doris (Morris) Stokes, was born October 8, 1946 in Sioux City. He grew up in the area and graduated from Central High School in 1965. He then attended Greer Technical School in Chicago, IL. Donald was drafted in the U.S. Army and served in Germany and Vietnam. He served with the military police in the 9th M.P. CO. On September 7, 1968 he married Mary Harcum at Third Presbyterian Church in Sioux City. The couple made their home in Sioux City. Donald made a career with Swanson Heating and Air Conditioning. Don was a fixer, builder, and the consummate handyman. He liked to fish, make model train layouts, garden, play cribbage, and care for his grandchildren. He was a member of Third Presbyterian Church and a charter member of Faith United Presbyterian Church. He was a member of the Men’s Club at the Church and he was active in the Men’s Club rummages. He also served many terms on the Session and Board of Trustees for both churches. He is survived by his wife of 52 years, Mary Stokes of Sioux City; son, Tod (Laura) Stokes of Sioux City; grandchildren, Nathan Stokes, Lillian Stokes; sisters, Ruth (Dean) Snyder of Sioux City, Doris Stokes of Eden Prairie, MN; brother, Walter (Connie) Stokes of Keller, TX; brother-in-law, Marvin Jensen of Sioux City; and many nieces and nephews. He is preceded in death by his parents; daughter, Christine Stokes; sisters, Eleanor (Delmar) Nielsen, Gladys Jensen, Martha Switzer; brother, Harvey (Kelly) Stokes Jr. Memorials can be directed to the Cystic Fibrosis Foundation https://www.cff.org/ Funeral service will be live streamed on Faith United Presbyterians Church's Facebook page. https://www.facebook.com/FaithUPC/

The family of Donald Leroy Stokes created this Life Tributes page to make it easy to share your memories.

Send flowers to the Stokes family.