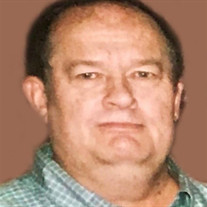 Donald Perera, 64, of Sioux City died Sunday, February 9, 2020 at the Cherokee Regional Medical Center. A memorial service will be held at 3:00 p.m. on Thursday, February 13, 2020 at Christy-Smith Funeral Homes Morningside Chapel located at 1801 Morningside Ave, Sioux City, IA. A visitation will be held on hour prior to the service. Donald Guy Perera, the son of Jerry and JoAnn (Morehead) Perera, was born July 12, 1955 in Sioux City, Iowa. He grew up in the area and attended Sioux City Schools. After high school he enlisted in the U.S. Navy. In 1982 he met his wife, Colleen Kunkel who he spent the last 38 years with. Don began working at Swift Packing Company and later John Morell packing plant. He was a natural handyman and a "jack of all trades". Don was an avid collector of all things, but especially antiques. His hobbies included organizing his various collections, fishing in his younger years, and making his friends and family laugh while they played cards or dice. Don often enjoyed visiting with his lifelong friend, Vic Beran and nephew, Tim Perera. He also loved to work on projects in the garage with his grandson, Cooper. He was an honorary member of the Robin Hood Fund and had a true way with words. Don is survived by many including his wife, Colleen Perera; children, Jeff (Jenny) Perera Shaun (Melissa) Vincent, Sissy Smith, Melissa Perera, and Denis Merrill; grandchildren, Tayler, Quintin, Cooper, Rolland, and Riley; great-grandchild, Karson; father, Jerry, brothers, Ron, Bob, Rick, Steve, Kenny, Larry and their spouses; along with numerous nieces and nephews. He is preceded in death by his mother, Jo; son, Greg; brother, Doug ; and his grandparents.

The family of Donald Guy Perera created this Life Tributes page to make it easy to share your memories.

Send flowers to the Perera family.