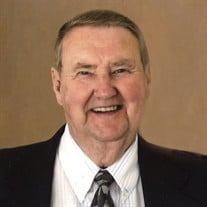 Donald L. “Don” Chesley, 80, died Sunday, November 17, 2019, at MercyOne Medical Center in Sioux City, IA. A memorial service will be 11:00 am Saturday, November 23, 2019 at Moville United Methodist Church with Pastor Jill Clem officiating. Visitation will be at the church one hour prior. A private burial will be at Graceland Park Cemetery in Sioux City. Christy-Smith Funeral Homes, Morningside, is assisting the family with arrangements. Donald L. “Don” Chesley was born December 26, 1938, to Ambrose and Bernice (Pilgrim) Chesley in Sioux City, IA. He graduated from East High School and earned his undergraduate and Master’s Degrees from Morningside College. During college years, Don was employed on the maintenance crew at The Sioux City Community School District and at Toller Drug Stores. Don married Judy Ray on August 19, 1961. Don and Judy were proudly blessed with a son, Gary, and a daughter, Nancy. Don began his teaching career in Seymour, IA, where he taught and coached for two years. The family then moved to Moville, IA, where Don continued in the educational field and found teaching and coaching at Woodbury Central to be very rewarding. Don's teaching at North Junior and East Middle Schools in The Sioux City Community School District is where he continued the majority of his thirty-eight year career. Many friendships and fond memories of students and teachers were formed. Don and Judy lived in Moville for 54 years before moving to Sioux City in the Fall of 2016. They have been members of the Moville United Methodist Church for 53 years. After retirement, Don enjoyed volunteer work at the Moville United Methodist Church, Meals on Wheels program in Moville, and volunteer work at the Tyson Events Center during basketball and volleyball tournaments. Don served on the Moville City Council Zoning Board and was a member of the Woodbury Central School Board of Education. Don’s most enjoyable hobby was fishing. He thoroughly appreciated trips with his son, Gary, and with his fishing buddies. He loved his pet cat, Spike, and also Golden Retrievers, Dusty, Jessie, Tasha, and Zoey, who lived with Nancy and Jed through the years. Don is survived by his wife, Judy; son, Gary and daughter-in-law, Susie, and their daughter, Ann; daughter, Nancy Chesley and son-in-law, Jed Hathaway, and Jed’s daughter, Kristin (Matt) Flynn and their children, Hayden, Keegan, Avelinn, and Breana; his brother, Glenn and sister-in-law, Mary Chesley; numerous nephews and nieces, including a special nephew, Ed Westbrook and his wife, Patty, who have given unconditional support and friendship; and a sister-in-law, Judy Kempton Ray. Don is preceded in death by his parents; in-laws, Wayne and Velma Ray; sisters, Joyce (Jim) Bressler, Ella (Paul) Malloy, Florence (Cliff) Colman, Lorraine (Paul) Becker, and Gladys (Bill) Hoverman; and brother-in-law, Denny Ray. In lieu of flowers, consider donations to the Moville United Methodist Church, the Cancer Society, or the Siouxland Humane Society.

The family of Donald L Chesley created this Life Tributes page to make it easy to share your memories.

Send flowers to the Chesley family.