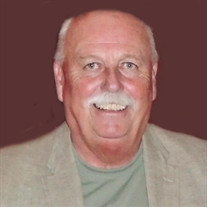 Don Duane Pratt, 71, from Sioux City, entered into eternal life on Feb. 21, 2020, at his home surrounded by his loving family. A memorial mass will be at 10:30 am Thursday, February 27, 2020, at Holy Cross Parish-St. Michael’s Catholic Church with Father David Hemann presiding. Visitation will be 4:00 pm 8:00 pm Wednesday, February 26, 2020, at Christy-Smith Funeral Homes, Larkin Chapel, 2320 Outer Drive North. A Catholic Daughter rosary will be said at 4:00 pm and a vigil prayer service will be at 7:00 pm at the funeral home. Don was born April 18, 1948, in Sioux City to Darlene & O’Don Pratt. He attended Lowell and North Junior grade schools & graduated from Central High School in 1967. He worked for the Milwaukee Railroad followed by the Burlington Railroad for ten years. He then worked for Briar Cliff College in the maintenance dept. and also established his own drywall & painting business. He married Linda Wille on September 6, 1969, at Blessed Sacrament Catholic Church. They were blessed with two wonderful sons. Don was a great father, guiding his boys in athletics and life. He loved all the sporting events and was always the loudest supporter or defender. He & his brother, Denny, coached the 13-year-old Junior Little League team in 1987, to a state title. His 7 grandchildren were the light of his life. He treasured his time with them and embraced their individual talents and abilities and encouraged them to always do their best. He never missed an event or activity until he became sick. Our week at Okoboji was always a highlight of the year & created many unforgettable memories & traditions. Don was incredibly grateful for all of the support he received from so many friends & family, especially his Heelan family & his great golfing buddies from Marty’s. Those to honor his memory are his wife of 50 years, Linda; their two sons, Jason & his wife, Beth Hand, & Jamey & his wife, Megan Hinds, all from Sioux City; his seven grandchildren, Christian, McKenzie, Sydney, Brayden, Sebastian, Finleigh & his little sweetie pie, Cambree; his brother, Denny & his wife, Betty, from Sioux City & his sister, Debby, & her husband, Brian Uber, from Kearney, Nebraska; plus many nieces & nephews & cousins. He was preceded in death by his parents. Don loved all of his family, his aunts, uncles & cousins. He loved all of his friends. He will be missed! Memorials may be directed to Hope Lodge in Omaha, and Bishop Heelan High School.

The family of Don Duane Pratt created this Life Tributes page to make it easy to share your memories.

Send flowers to the Pratt family.