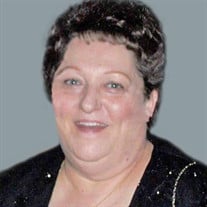 Dixie L. Wulf, 79, of Bronson, IA, died Tuesday, January 26, 2021, at Pleasant View Nursing Home in Whiting, IA. A visitation will be 5:00 p.m. to 7:00 p.m., Monday, February 1, 2021, at Christy-Smith Funeral Homes, Morningside Chapel, 1801 Morningside Avenue, followed by a Memorial Service at 7:00 pm. Online condolences can be left for the family at www.christysmith.com. Dixie Lee Willhauck, the daughter of David and Jewell (Smallwood) Willhauck was born January 12, 1942, in St. Louis, MO. She graduated from Hancock High School in St. Louis. Dixie went on to attend Murry State College in Louisville, KY. She then worked at Prudential Life Insurance in the office. On July 25, 1964, Dixie was united in marriage with Richard J. Wulf in St. Louis. After the couple moved to Bronson, she worked as a Teacher’s Aide for the Lawton-Bronson School System. Dixie later became the secretary for the elementary school, retiring in 2004. Richard died June 11, 2008. Dixie enjoyed working at the school, she loved her time with the kids. She was also known for her decorated cakes and Christmas goodies. You could also find her reading mystery books or doing crossword puzzles. Then came grandchildren, she loved spending time with and spoiling them. Dixie is survived by her daughter, Kristin “Kris” (Steve) Holst of Hornick, IA; her grandchildren, Madison and Rachel Holst; son- in-law, Joe Muscolino of Weymouth MA; a half-brother, Chuck Tipton of St. Louis, MO; and many other relatives and friends. She was preceded in death by her parents; husband; a daughter, Julie Muscolino; and a brother, Bob Willhauck. The family has requested that memorials be directed to a local Alzheimer’s and Dementia support group.

The family of Dixie Lee Wulf created this Life Tributes page to make it easy to share your memories.

Send flowers to the Wulf family.