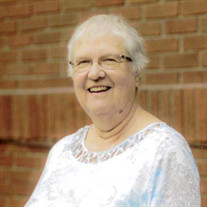 Diane E. Zimmer, 83, of Sioux City passed away Thursday, June 24, 2021, at her residence. Funeral service will be held at 11:00 a.m. Wednesday, June 30, 2021, at Christy-Smith Larkin Funeral Home in Sioux City. Visitation will begin at 10 a.m. Burial will be at Memorial Park Cemetery following the service. Miss Zimmer was born Oct. 15, 1937, in Le Mars, IA, the daughter of William J. and Cleone (Ford) Zimmer. She was raised in LeMars and graduated from LeMars Gehlan High School. She moved to Sioux City in 1956. She graduated nursing school in 1959 and went on to work as a pediatric nurse for 41 years at Mercy Hospital. Diane was always the caregiver. Diane and her twin sister, Suzanne, adopted 3 children of their own, Jennifer, Jason, and Kathryn. Diane loved spending time with her family. She often talked about summers spent in Okoboji with friends and family. In her moments of free time, she loved to read. Survivors include Jennifer Zimmer and Dan Brennan of Omaha, NE, Jason and Rebecca Zimmer, and Katie Zimmer of Sioux City, IA; grandchildren, Mariana, Eliana, Oliver, and Alejandro; siblings and their spouses, Donald Zimmer of Sioux City, David and Joyce Zimmer of Vermillion, SD, Eileen Geary of Sioux City, and Jean and Terry Pennykamp of University Park, FL. She is preceded in death by her twin sister, Suzanne, and her parents. Diane’s family wishes to extend a special thank you to the health care professionals at Mercy One hospital, June E. Nylen Cancer Center, and St. Croix Hospice (Hope & Sheila) for their loving care and compassion.

The family of Diane Elizabeth Zimmer created this Life Tributes page to make it easy to share your memories.

Send flowers to the Zimmer family.