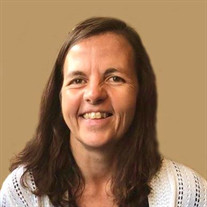 Diana Coil Gobell, 53, passed away in the evening of October 26, 2019 after a tenacious and brave battle with cancer. She was at home surrounded by her family and dog. Diana will be remembered for her go-getting, optimistic, and selfless personality as well as her constant display of strength and determination. She was an incredible mother, wife, daughter, sister, and friend to many. A visitation will be 5-7 pm on Wednesday, October 30, 3019 at Christy-Smith Funeral Homes, Morningside, with a prayer service at 6:30 pm. A Mass of Christian Burial will be at 10:30 am on Thursday, October 31, 2019 at Mater Dei Parish-Immaculate Conception Catholic Church with burial to follow at Calvary Cemetery in Sioux City. Diana was born in Minneapolis, MN on June 29, 1966 to Don and Mary Coil. She lived with her parents and brother in Monticello where she graduated from high school. Diana attended the University of North Dakota and graduated with a degree in Social Work to turn her passion of helping others into a career. On December 30, 1989 she married the love of her life, Jim Gobell, in Minneapolis. Jim and Diana lived in Minnesota where Diana was a social worker for individuals with developmental disabilities. While living in Minnesota, they welcomed daughters, Alexandra and Kirsten. Always supportive of her husband’s career, the family moved to Illinois for Jim’s job change in 1996. Diana continued her career as a social worker in Rock Island, IL where they also welcomed a son, Nathan. In 2000, the family moved to Sioux City, IA. Diana’s work for the disabled and elderly continued as a social worker at Connections Area Agency on Aging and Siouxland Pace, all the while being a devoted mother and wife. Diana was a member of Mater Dei Parish. She was always helping others and was a long-time volunteer for Meals on Wheels. She was a constant source of light, joy, and support to everyone around her, especially her family. Her family was very important to her and she was very proud of her children and husband. She would often show her love by baking for them, leaving sweet notes in Jim’s car or briefcase, or mailing Halloween, Valentine’s, and St Patrick’s Day care packages to her children. She made it a priority to always attend her children’s activities throughout their whole lives, even as they grew into adulthood. It wasn’t uncommon for her to drive in the night, through horrible weather, to make it to one of her kid’s soccer games, swim meets, or band concerts many hours away. She raised three amazing kids: Alexandra, a social worker of St Paul, MN; Kirsten, a physical therapist of Overland Park, KS; and Nathan, a firefighter and student of Nevada, IA. In addition to her children and husband of 29 years, she is also survived by her parents of Staples, MN; brother, Greg Coil and his wife, Ellen, of Milaca, MN; her daughter Kirsten’s fiancé, Delaney; and many relatives and friends. The family wishes to extend their gratitude to the providers and staff of Unity Point Health St Luke’s, Hospice of Siouxland, June E. Nylen Cancer Center, and the University of Nebraska Medical Center in Omaha for the wonderful care and support that was provided to Diana and her family. Memorials may be made in Diana’s name to the June E. Nylen Cancer Center or Siouxland Connections Meals-on-Wheels program.

Diana Coil Gobell, 53, passed away in the evening of October 26, 2019 after a tenacious and brave battle with cancer. She was at home surrounded by her family and dog. Diana will be remembered for her go-getting, optimistic, and selfless... View Obituary & Service Information

The family of Diana Coil Gobell created this Life Tributes page to make it easy to share your memories.

Diana Coil Gobell, 53, passed away in the evening of October...

Send flowers to the Gobell family.