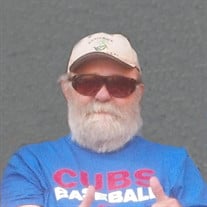 Dennis K. Smothers, 72, died July 31, 2019, at Unity Point-St. Luke’s Medical Center in Sioux City, IA. A memorial visitation will be 4:00 pm to 7:00 pm Monday, August 5, 2019, at Christy-Smith Funeral Homes, Morningside. Dennis Kaye Smothers, the son of Donald and Irma (Morgan) Smothers was born January 11, 1947, in Rodney, IA. His family moved to Sioux City when he was in the third grade, and Dennis finished his education at Central High School. Dennis was employed at Kemp Tire until they closed. In 1982, he was united in marriage with Janet Hoover. Dennis then worked in production at Gateway and then as a seasonal worker for the City. He retired in the early 2000’s. Dennis was a member of a Pool league, liked to golf, and enjoyed watching football and baseball, especially the Packers and the Cubs. Dennis also liked to watch professional wrestling. Dennis is survived by his wife Janet of Sioux City; his daughters, Tammy (Tim) Holmberg of Sioux City, Pam (Marc) Jump of Sioux Falls, SD, Kathy Short of North Sioux City, SD; two grandchildren, Kelsey (Dan) Ries and Raymond Short; a great-grandson, Logan Devries; a niece, Stephanie Smothers of Des Moines; and many other relatives and friends. He was preceded in death by his parents; and two brothers, Donnie and Dewey Smothers.

The family of Dennis K. Smothers created this Life Tributes page to make it easy to share your memories.

Send flowers to the Smothers family.