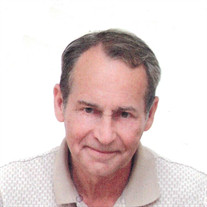 Dennis M. “Denny” Mathewson, 77, died Monday, November 30, 2020, at Accura HealthCare in Sioux City, IA. A private family graveside service was held at Graceland Park Cemetery. The family was assisted by Christy-Smith Funeral Homes, Morningside, with arrangements. Dennis Myron Mathewson, the son of Myron and Mary (Kitchen) Mathewson was born April 13, 1943, in Sioux City, IA. He graduated from Central High School. On September 4, 1964, Denny was united in marriage with Kathleen “Kathy” Bornhorst in Sioux City, IA. He was employed in the meat processing industry for his entire career. Throughout those years, Denny ran his own hauling business. He retired near the age of 70. Kathy died June 15, 2018. Denny enjoyed bowling, Wii bowling at the Senior Center, and attending sporting events featuring his grandchildren and great-grandchildren. He also enjoyed visiting with people, but his greatest joy was hot fudge malts. Denny understood and exemplified the values of hard work, love and commitment to his family. His hauling business and his 50 years in the meat processing business kept him very busy, yet he always made time to help others whenever they needed it. He and Kathy lived up to their mantra of “We Did Our Best” as they managed through life’s challenges. His strong work ethic was an inspiration to all who were lucky enough to call him friend. Denny is survived by a son, Chris (Ronda) Mathewson of Peoria, IL; six grandchildren; six great-grandchildren; a son-in-law, Hilarion Anguiano of Sioux City; a sister, Judy (Don) Severson of Overland Park, KS; and many nieces and nephews. He was preceded in death by his parents; wife, Kathleen; daughter, Debra Anguiano; and siblings, Jerry Mathewson and Darla Doescher. In lieu of flowers, please consider a donation to a local food bank to help others.

The family of Dennis Myron Mathewson created this Life Tributes page to make it easy to share your memories.

Send flowers to the Mathewson family.