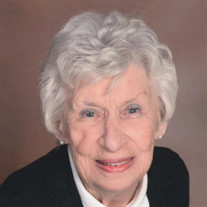 Deloris “Dee” Ellsworth, 92, died Tuesday, July 14, 2020, at Unity Point-St. Luke’s Hospital in Sioux City, IA. A private family funeral service will be held. A recording of the service will be posted at a later date at www.calvaryleeds.com The family is being assisted by Christy-Smith Funeral Homes, Larkin Chapel. Deloris Mary Ellen Stier, the daughter of Harvey and Viola (Cowan) Stier was born August 24, 1927, in Schleswig, IA. She graduated from Battle Creek, IA High School in 1944, and went on to earn her nursing degree from the Lutheran Hospital School of Nursing in 1948. On January 3, 1948, Dee was united in marriage with Charles Ellsworth in Sioux City. She was employed as a Registered Nurse for the former Lutheran Hospital and as an Office Nurse for Siouxland OB/GYN. Dee retired from nursing in 1993. Charles died December 8, 1996. Dee was a member of Calvary Lutheran Church in Sioux City, IA and the Martha Circle. She enjoyed reading, sewing, flowers, and fishing at Lake Shetek. Dee is survived by her daughter, Linda Hesebeck of Sioux City; two grandchildren, Amanda (Richard) Rennolet and Michael Hesebeck, all of Sioux City; two great-grandchildren, Reese Rennolet and Jack Rennolet; nieces and nephews; and many other relatives and friends. She was preceded in death by her parents; husband; a sister, Marjorie DeJong; and an infant sister, Doreen. The family has requested that memorials be directed to Calvary Lutheran Church.

The family of Deloris "Dee" Ellsworth created this Life Tributes page to make it easy to share your memories.

Send flowers to the Ellsworth family.