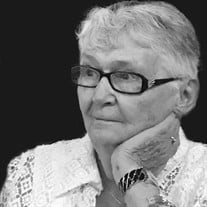 Delores “Peg” Bies, age 85, of Sioux City, Iowa passed away Monday, February 22nd surrounded by her family. Peg was born in Wagner, SD on January 6, 1936 to Elmer and Mary (Jones) Deurmier. She graduated from Albert Lea, MN High School in 1954 and attended Southern State Teacher’s College in Springfield, SD where she earned a 2-year teacher’s certificate. She was in the homecoming court and met the love of her life Denny Bies at Southern. After teaching in Lennox, Peg married Denny on Dec. 27, 1956. They had six children, Mike, Patti, Marc Dennis who passed as an infant, Marc, Tim, and Tom. Peg was the mother of two sets of twins. Denny and Peg led a busy life with this family in the communities of Tabor, SD, Kingsley, IA and Marcus, IA. Peg lost her husband to cancer in 1971 and proceeded to raise 5 children. She held many jobs all which allowed her to share her gift of caring for others. She worked as a librarian, a school secretary, a nanny, and the job she loved the most at Ronald McDonald House in Sioux City. Peg was proud of all her family’s accomplishments. She was counted on by family members for updates on what was happening in all their lives from Oregon to Pennsylvania and everywhere in between. Peg is survived by her children, Patti Robinson of Moville, IA, Mike (Kathy) Bies of Tualatin, OR, Marc (Susan) Bies of Yankton, SD, Tim (Jane) Bies of Omaha, NE, and Tom (Cheryl) Bies of Omaha, NE. Peg held a special place in her heart for her 15 grandchildren and 13 great-grandchildren. She welcomed to heaven by her husband, Dennis; her son, Marc Dennis; brother, Donnie; and parents, Elmer and Mary. A family graveside service will be held and a celebration of life is being planned for this summer.

The family of Delores "Peg" Jean Bies created this Life Tributes page to make it easy to share your memories.

Send flowers to the Bies family.