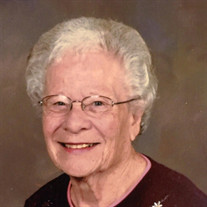 Della Mae Newman, 92, died Saturday, August 17, 2019, at Sunrise Retirement Community after a lengthy battle with Dementia, surrounded by her family. A visitation will be 4:00 p.m. to 8:00 p.m., Tuesday, August 20, 2019, at Christy-Smith Funeral Homes, Morningside, with the family present from 6:00 p.m. to 8:00 p.m. and a prayer service at 7:00 p.m. A funeral service will be 10:00 a.m., Wednesday, August 21, 2019, at St. Mark Lutheran Church, 5200 Glenn Ave., with Rev. David Halaas officiating. Burial will be in Memorial Park Cemetery. Online condolences can be made to the family at www.christysmith.com. Mrs. Newman was born September 22, 1926, in Mapleton, IA, the daughter of Franklin Joseph Hanson and Melissa Jane (Schaefer) Hanson Potter. She attended Mapleton schools and went on to achieve her GED from Western Iowa Technical Community College in Sioux City, IA in 1970, after raising her four children. She married Dayrl O. Newman on July 30, 1945, in Mapleton, IA. Mr. Newman died January 22, 2001. She was a homemaker and after the children were raised, she worked briefly outside the home at the Palmer House Motel and the Zenith Corporation. She enjoyed her “alone” time with her morning cups of “strong” coffee and reading the Sioux City Journal Newspaper. She loved fishing vacations in Minnesota with her family. She also loved supporting her grandchildren and great-grandchildren in all their activities. Della is survived by her two daughters, Sharon Harris of Waite Park, MN, and Sheila Peterson of Sioux City; two sons, Ray (Anne) and Michael (Sherry), all of Sioux City; eight grandchildren, David, Edward, and Sarah Harris, Shannon Spanel, Ryan Newman, Christopher Kurth-Newman, Dayrl and Aaron Newman; and 11 great-grandchildren. She was preceded in death by her parents; husband; sister, Twila Schoenherr; three brothers, Albert, Harold, and Franklin “Gerald”; and son-in-law, Richard Peterson. The family wishes to sincerely thank the Sunrise Retirement Community as a whole, especially the Sunlight Neighborhood Staff, for their understanding and compassion working with Dementia and Alzheimer’s residents, and of course, the Hospice of Siouxland Care Team in their unfailing and heartfelt dedication. They are true angels during difficult times.

The family of Della Mae Newman created this Life Tributes page to make it easy to share your memories.

Send flowers to the Newman family.