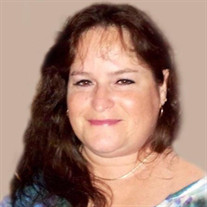 Debra A. Anguiano, 50, died Thursday, July 30, 2020, at her residence in Sioux City, IA. A funeral service will be 10:30 a.m., Friday, August 7, 2020, at Christy-Smith Funeral Homes, Morningside Chapel, 1801 Morningside Ave, with visitation beginning at 9:00 a.m. prior to the service. Burial will be in Graceland Park Cemetery at a later date. Debra Ann Mathewson, the daughter of Dennis and Kathleen (Bornhorst) Mathewson was born October 17, 1969, in Sioux City. She graduated from East High School in 1988. On August 4, 2004, Debra was united in marriage with Hilarion “Larry” Anguiano in Elk Point, SD. She was employed in various positions at Pech Optical. Debra was a breast cancer survivor. She loved spending time with her family and grandchildren, which included attending all of their sporting events. Debra loved watching movies, roses, and having “fireside” chats with family and neighbors in the back yard around the fire pit. Debra is survived by her husband, Larry; children, Mindy (Phil Carda) Mathewson, Michael (Alex Hale) Mathewson, Alicia Anguiano, all of Sioux City; six grandchildren, Madison, Charlie, Skilynn, Easton, Landon, and Myron; her father, Dennis of Sioux City; a brother, Chris (Ronda) Mathewson of Peoria, IL; three nieces; and many other relatives and friends. She was preceded in death by her mother.

The family of Debra Ann Anguiano created this Life Tributes page to make it easy to share your memories.

Send flowers to the Anguiano family.