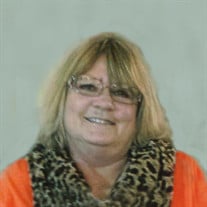 Deborah J. Angerman, 64, died Tuesday, September 21, 2021, at her residence in Sioux City, IA. A visitation will be 4:00 pm to 7:00 pm Monday September 27, 2021, at Christy-Smith Funeral Homes, Morningside Chapel, 1801 Morningside Avenue. A funeral service will be 10:00 am Tuesday September 28, 2021, at Christy-Smith, Morningside, with burial to follow in Memorial Park Cemetery. Online condolences may be expressed to the family at www.christysmith.com. She was the daughter of Henrich and Delores (Hovland) Andersen and was born on May 28, 1957, in Sioux City, IA. She attended East High School. On September 3, 1977, Deborah was united in marriage with Timothy “Tim” Angerman in Sioux City. She worked as a housekeeper at multiple residential facilities in Sioux City until she retired in 2001 to care for her nieces, nephews, and granddaughters. Deborah devoted her life to her entire family. She was a loving wife, mother, grandmother and family member. Spending time with the love of her life was one of the things she looked forward to most, she loved the simple life. She cherished the many long conversations she had with her children. She couldn’t wait to find out what’s been going on in their daily lives and hearing the newest adventures they were exploring. She enjoyed the Fourth of July gatherings with her family, nightly bonfires, hanging out with her fur babies Jemma and Buster, shopping with her sisters, and playing games with the family. She also enjoyed going to and supporting her grandchildren’s sporting events and spending summers together at the pool. Deborah is survived by her husband, Tim of Sioux City; sons, Joshua (Regina) of Sergeant Bluff, IA, Timothy (Alicia) of Sioux City, Nicholas (Bong) of Aurora, CO; five grandchildren; siblings, Tami (Mike) Angerman of Sioux City, William “Billy” Andersen of Sioux City, Sandy (Loyd) Anderson of Sioux City, Terri (Jesse) Scott of Sioux City; many nieces and nephews; and many other relatives and friends. She was preceded in death by her parents, an infant sister, Nancy Jo and her Father and Mother In Law, Carl and Dorothy Angerman.

The family of Deborah Jean Angerman created this Life Tributes page to make it easy to share your memories.

Send flowers to the Angerman family.