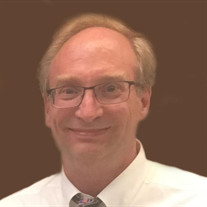 David Lynn Rebstock, affectionately known as "Rebby," 59, of Sioux City, died Saturday, June 30, 2018, at Floyd Valley Hospital in Le Mars, Iowa. Funeral services will be 10:30 a.m. Friday at Grace United Methodist Church, 1735 Morningside Ave., in Sioux City, with the Rev. James Shirbroun officiating. Interment will be in Memorial Cemetery, Le Mars. Visitation will be 4 to 8 p.m. Thursday, with the family present 6 to 8 p.m. and a prayer service at 7:30 p.m., at the church. Arrangements are under the direction of Morningside Chapel, Christy-Smith Funeral Homes. Online condolences may be made to the family at www.christysmith.com. Born on Jan. 27, 1959, in Lansing, Mich., Dave was the son of Theodore and Barbara (Lee) Rebstock. He grew up in Le Mars and graduated from Le Mars Community High School in 1977. Dave went on to attend Westmar College in Le Mars, graduating magna cum laude with a bachelor of arts degree in history in 1981. Before graduating from college, he started working for the Le Mars Daily Sentinel as its sports editor and continued working there until 1990. In 1989, he began his job as the sports information director and golf coach at Westmar College, which later became Teikyo Westmar College and then eventually Westmar University. His media guides at Westmar won awards for excellence. In 1997, Dave assumed the positions of sports information director and women's golf coach at Morningside College. In 2000, he relinquished his duties as head golf coach and focused full time on the communications department, which involved new responsibilities and the title of Sports Information Director/Public Relations Writer. He worked tirelessly on creating programs and press releases for all sporting events, keeping the athletic website current, and working with all media outlets. He also served on many committees and task forces during his years at Morningside and was always a great advocate for the Morningside athletes. In 1994, he married Peggy Meyer and the couple was blessed with Jessica in 2000. While the couple divorced in 2006, they remained committed to raising their daughter together. Most of all, Dave is best remembered as an outstanding father, friend, and mentor. Kind and considerate, he poured out his life for others, showering constant love on his daughter, Jessica Irene, helping his family, and working to assist athletes and colleagues. He also served as a member of Grace United Methodist Church. His love of sports flowed from work into his personal life. He was an avid Mets baseball fan and Oakland Raiders football fan. He also loved his pets, movies and music, especially the band, Chicago, and attended concerts whenever possible. Surviving are his daughter, Jessica Irene Rebstock of Sioux City; parents, Theodore and Barbara (Lee) Rebstock of Le Mars; brother, Don (Heather) Rebstock and two nieces, Amanda and Emily Rebstock, all of Grayslake, Ill.; an aunt, Frances Rebstock of West Fargo, N.D.; a cousin, Cathy (Kelly) Prichard; his dog, Scruffy; and his cat, Measha. In lieu of flowers, the family requests donations be made in David's memory to the Siouxland Humane Society, 1015 Tri View Ave., Sioux City, IA 51103.

The family of David L. Rebstock created this Life Tributes page to make it easy to share your memories.

Send flowers to the Rebstock family.