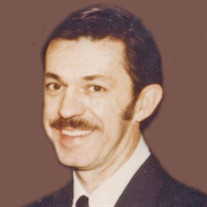 David J. “Dave” McCarthy Sr., 77, died Monday, August 27, 2018, at his residence in Sioux City, IA. A visitation will be 4:00 pm to 7:00 pm Thursday, August 30, 2018, at Christy-Smith Funeral Homes, Morningside. A memorial service will be 10:30 am Friday, August 31, 2018, at Christy-Smith, Morningside. David Joseph “Dave” McCarthy, the son of Lloyd and Louise (Grewe) McCarthy was born March 20, 1941, in Sheldon, IA. He graduated from high school in Sheldon in 1959. Dave was employed at Harm’s Implement as a mechanic and then for Palmer Candy for many years. He then worked for Sioux City Brick and Tile in maintenance, from which he retired from. Dave’s favorite part of his stay there was manufacturing parts and equipment needed in the Lab. Dave enjoyed camping and fishing. He loaded and shot black powder weapons, and in his 50’s, took up skydiving. Dave is survived by his lifetime companion, Rhonda McCarthy of Sioux City; his children, Michael Joseph (Jayne) McCarthy of North Sioux City, SD, Tina (Byron) Loft of Sioux City, Carla (Don) McCarthy-Warneke of Marysville, OH, David “D.J.” McCarthy Jr. of Sioux City; 13 grandchildren; 12 great-grandchildren; a brother, Jack (Evelyne) McCarthy of Sheldon; and many other relatives and friends. Dave was preceded in death by his parents; a daughter, Skie Marie Hitzemann; four sisters; and one brother

The family of David McCarthy created this Life Tributes page to make it easy to share your memories.

Send flowers to the McCarthy family.