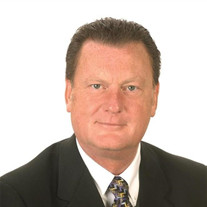 David L. Davenport, 66, a life-long Sioux City resident, died on Friday, Oct. 25, 2019, following a stroke. Memorial service will be 11 a.m. Tuesday at Grace United Methodist Church located at 1735 Morningside Avenue in Sioux City, with James Shirbroun officiating. The family will receive friends from 4 to 8 p.m. Monday at Christy-Smith Morningside Chapel, located at 1801 Morningside Avenue in Sioux City. Online condolences may be made to the family at www.christysmith.com. Dave was born April 19, 1953, in Sioux City, to Alfred "Fred" B. Jr. and Martha J. (Roe) Davenport. He graduated from East High School in 1971 and Iowa State University in 1976. At ISU, Dave was a brother of Pi Kappa Alpha fraternity. He married Lori Patee in 1975 at Grace United Methodist Church. The couple has two children, Michael and Ashley. After college, Dave earned several designations in the real estate field including CCIM, CPM, and SIOR. He owned Davenport Real Estate for many years, both selling and developing commercial, industrial and residential real estate. During his career, he was very involved in Sioux City real estate. He served on the Sioux City Planning and Zoning Board, Northwest Iowa Board of Realtors, serving on the Finance Committee and chairperson twice, served on the MLS Committee, numerous years on the Board of Directors and was Board President in 1988, 2005 and 2006. Dave enjoyed spending time with his Boxer dog Maggie, his family, and especially being "Papa" to his four grandchildren. His hobbies included golfing, bowling, hunting, fishing, vintage cars and motorcycles, especially Harley Davidsons. He is survived by his wife, Lori, and his two married children, Michael and Lindsay Davenport and their children, Anna and Burke, Ashley Davenport and Brent Bates and their children, Charles and Mackenzie. He is also survived by his two sisters, Karen and her husband, Robert Thomas and Julie Davies-Roost; his brother, Deane and his wife, Kim Davenport; his brother-in-law, Dave and his wife, Marta Patee; numerous nieces and nephews; and his best friend and constant companion, his dog Maggie. He was preceded in death by his parents; and brother, Alfred "Fred" Davenport III. In lieu of flowers, the family requests memorials to Jackson Recovery.

The family of David Lynn Davenport created this Life Tributes page to make it easy to share your memories.

Send flowers to the Davenport family.