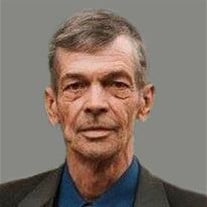 Darrel R. Hansen, 63, of Sioux City passed away Thursday, July 19, 2018 at Mercy Medical Center. A funeral mass will be held on Wednesday, July 25 at Immaculate Conception Catholic Church at 10:30 AM with Fr. Dan Rupp officiating. Burial will follow at Memorial Park Cemetery. A visitation will be held on Tuesday night from 4 PM until 8 PM with a prayer service at 7 PM at Christy-Smith Funeral Homes, Morningside Chapel. Darrel was born on June 1, 1955 in Sioux City to Henry F. and Lois (Fink) Hansen. Growing up he lived on the family farm near Lawton, IA until his family moved to Sioux City when Darrel was 7. In 1973, Darrel graduated from East High School. Darrel worked for the Iowa Department of Transportation as a mechanic for 19 years. For a few years, he taught classes at WIT. Darrel was a registered mechanic who taught his coworkers and friends a lot. In 2001, he married Carol Schmitz in Elk Point, SD and the two remained together until his passing. Darrel was a man who always loved getting his hands dirty by building things like cabinets and restoring cars. He loved antiquing, camping, car shows, and helping people. Darrel will be missed by all who knew him. Darrel is survived by his wife, Carol Hansen of Sioux City; mother, Lois Hansen of Sioux City; step-daughter Melissa (James) Miller of Sioux City; five grandchildren, Ryan (Emily) Miller of Armstrong, IA, Alyssa, Reese, Arianna, and Rhett Miller, all of Sioux City; brothers and sisters-in-law, Ray (Linda) Schmitz, Jim (Kaye) Schmitz, Joan (Gary) Eslick, Bill (Judy) Schmitz, Genny Ruhaak, Jerry (Sally) Schmitz, and Kenny (Peggy) Schmitz; and numerous nieces and nephews. He is preceded in death by his father, Henry F. Hansen; and brother-in-law, Billy Ruhaak.

The family of Darrel R. Hansen created this Life Tributes page to make it easy to share your memories.