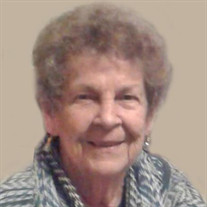 Darlene Ann (McCuddin) Mercural, 86, of Sioux City passed away Tuesday, September 8, 2020 after a brief illness. Services will be held at 11:00 a.m., Monday, September 14, 2020 at Redeemer Lutheran Church in Sioux City. A visitation will be Sunday, September 13, 2020 at Christy-Smith Funeral Home, Morningside Chapel, from 4:00 p.m.-7:00 p.m. with family present from 5:00 p.m.-7:00 p.m. On-line condolences may be left at www.christysmith.com Darlene was born on December 18, 1933 in Sioux City to Orville and Leona (Junck) McCuddin. She graduated from Leeds High School and then attended the Ellis School of Cosmetology to begin her career as a stylist. Darlene married Richard (Dick) Mercural on October 11, 1952 and with that came their blessings of four wonderful sons, Jay (Karen) of Sioux Falls, South Dakota, Randy of Ward, Colorado, Ted (Leslia) of Sioux City, Iowa, and Wayne (Stacy) of Sioux City, Iowa; 11 Grandchildren; 11 Great-Grandchildren; sisters-in-law, Carol McCuddin and Delores McCuddin; brother-in-law, Tom Beller;, and many nieces and nephews. She was preceded in death by her parents; two brothers, Waldo and Eldon; and two sisters, Marilyn Beller and Bev Buddi. Family and friends were the center of Darlene’s life and she will be deeply missed.

The family of Darlene A Mercural created this Life Tributes page to make it easy to share your memories.

Send flowers to the Mercural family.