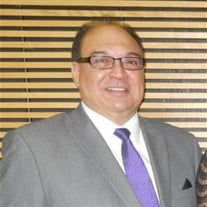 Daniel J. “Dan” Rodriguez, 66, died Sunday, October 6, 2019, surrounded by his family, at MercyOne Medical Center in Sioux City, IA after losing a short battle with cancer. A visitation will be 4:00 pm to 7:00 pm Wednesday, October 9, 2019, at Christy-Smith Funeral Homes, Morningside, with a parish vigil service at 7:00 pm. Mass of Christian Burial will be 10:00 am Thursday, October 10, 2019, at St. Joseph Church - Cathedral of the Epiphany Parish , 1112 8th St., Sioux City. Daniel Joseph “Dan” Rodriguez, the son of Esa and Catherine (Tierno) Rodriguez was born April 30, 1953, in Sioux City, IA. He graduated from Bishop Heelan Catholic High School in 1971. Dan went on to attend Mount Marty College in Yankton, SD. After college, Dan went to work for the railroad. In 1986, he was employed at Marian Health Center (later, MercyOne) as a security guard, and remained there for 32 years. In 1988, Dan was united in marriage with Brenda Bolton in Sioux City. The couple later divorced. Brenda died December 10, 2017. On January 29, 2019, Dan was united in marriage with Kris Onwiler in Sioux City. He greatly enjoyed yardwork, fishing, and watching Notre Dame football. Dan’s greatest love, however, was spending time with his family. Dan was a very kind, caring, and compassionate man. There isn’t anything he wouldn’t do for you. He would give you the shirt off of his back and his last dollar if you needed it. When you said to him “I Love You”, he would say back “I Love You More”. He will be deeply and greatly missed by all those who knew him. The family would like to thank the doctors and nurses on the Oncology floor at MercyOne for the wonderful care Dan received while in the hospital. He is finally out of pain. Rest in Peace, Dan the Security Man. WE LOVE YOU MORE! Dan is survived by his wife, Kris; four children, Angela (Brandon Dicks) Rodriguez, Michael (Ally Avise) Rodriguez, Shelby Onwiler, Abby Onwiler; two sisters, Louise (Ron) King, Jean Rodriguez; his in-laws, Don and Barb Miens; sister-in-law, Cyndi (Rod) Gregg; two grand-pups; and three grand-cats, all of Sioux City. He was preceded in death by father, Esa; his mother and stepfather, Catherine and Bob Walding; a brother, Jim; and his first wife, Brenda. “He was the love of my life and my best friend. Our time together was way too short. You will always be in my heart.” --Kris The family has requested that memorials be directed to the June E. Nylen Cancer Center or the Oncology Department at MercyOne.

The family of Daniel Joseph "Dan" Rodriguez created this Life Tributes page to make it easy to share your memories.

Send flowers to the Rodriguez family.