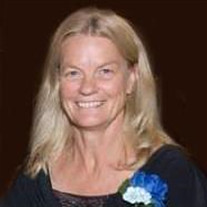 Cynthia Renee Gray age 62, of Sioux City died on Tuesday March 26, 2019 at her residence surrounded by her loving family. Funeral Services will be held at 10:30 a.m., Saturday, March 30,2019 at Larkin Chapel, Christy Smith Funeral Homes with Pastor Jim Wilson officiating. Burial will follow in Memorial Park Cemetery. Visitation will be held on Friday from 4:00 p.m. until 8:00 p.m. with the family present 6:00-8:00 p.m. and a prayer service held at 7:00 p.m. at the funeral home. Cindy was born in Sioux City, Iowa on February 27, 1957, the daughter of E. Wesley and Beverly (Thompson) Andrews. She attended and graduated from Lawton-Bronson with the class of 1975. She then enrolled at Morningside College where she was a member of the Basketball and Softball teams. She was named the Most Valuable Player on the basketball team for the 1976-77 season and was named all-conference on the softball team as a center fielder. She graduated from Morningside with a double major in 1980. She was united in marriage with Robert “Bob” Gray on June 28, 1980 and this union was blessed with two children. She began teaching Special Education at the South Sioux City High School while continuing her education at Morningside College where she received her Masters Degree in 1984. In 1985 she continued her career by teaching Special Education at Woodrow Wilson Middle School in Sioux City for 5 years before trading her dress in for sweats and began teaching Physical Education which she continued to teach until Woodrow Wilson closed, and then began teaching P.E. at the new North Middle School where she still was working at the time of her passing. She also had taught Drivers Education in Sioux City and surrounding schools. Cindy was a member of the Sioux City Public Educators, the National Education Association and the Rustin Avenue Methodist church. She loved her garden. She was known for her sweet corn, salsa, and jelly canning. She enjoyed watching, coaching and participating in many sports, as well as taking care of her horses and being an active member of 4-H. Cindy’s life will always be remembered and cherished by her husband of 39 years, Bob of Sioux City; her daughter, Kalifornia and her husband Sergio Sotelo of Des Moines, Iowa; and her son, Rob and his wife Rebecca of Sioux City; and two grandchildren on the way. She is also survived by her brother, Eron Andrews of Kingsley, Iowa; her sister, Chris Goodchild and her husband Klint of Royal, Iowa; her father, Wes Andrews of Sioux City; with her Matron of Honor and special caregiver for the past week, Therese Jensen of Yacolt, Washington; as well as many extended family members and friends.

The family of Cynthia Renee Gray created this Life Tributes page to make it easy to share your memories.

Send flowers to the Gray family.