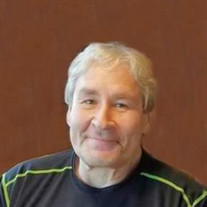 Curtis Lee Wiemann, 61, of Sioux City passed away Friday night, November 20, 2020 at his apartment on the West side of Sioux City. A Memorial Service will be 1:00 p.m. Monday, November 30, 2020 at Christy-Smith Funeral Home, Sioux City, IA. Burial will be at Graceland Park Cemetery. Visitation will be held one hour prior to the service. With Covid-19 restrictions, masks are mandatory. Curtis Wiemann was born December 30, 1958 in Audubon, IA. The son of Ted and Wanda Wiemann. He attended school in Elk Horn, IA, Canton, SD, and Cherokee, IA where he graduated. Curtis was born with a blood disorder, Von Willebrand Disease, which he struggled with all his life. It caused damage to his joints and limited his activities. He made several trips to Florida to the V.W.D. Connect Foundation meetings; he also was a spokesperson on the panel. When he moved to Sioux City, Curtis worked at Howard Johnson as a cook in the kitchen for years. Later, he helped his dad, Ted, with handyman’s work. This past year he has been associated with Door Dash, delivering fast food to many homes in the area. Curtis was a Chiefs and Vikings fan, he watched NFL football almost every Sunday when it was available. He also did a lot of painting of pictures and small vases. That was his favorite hobby. Curtis is survived by his dad, Ted; a brother, Mark of Algona, IA; a sister, Amy Jo of Sioux City; along with many nieces and nephews in the area. He is preceded in death by his mother, Wanda Mae as of January 10, 2019. In lieu of flowers donations can be made to the V.W.D. Connect Foundation.

Curtis Lee Wiemann, 61, of Sioux City passed away Friday night, November 20, 2020 at his apartment on the West side of Sioux City. A Memorial Service will be 1:00 p.m. Monday, November 30, 2020 at Christy-Smith Funeral Home, Sioux... View Obituary & Service Information

The family of Curtis L Wiemann created this Life Tributes page to make it easy to share your memories.

Send flowers to the Wiemann family.