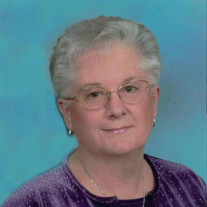 Constance Rasmussen, age 83, of Sioux City passed away Thursday, March 3, 2022, at a local care facility. A visitation will be held from 4:00-7:00 p.m. on Friday, March 11, 2022, at Christy-Smith Funeral Homes, Larkin Chapel located at 2320 Outer Drive N, with a Prayer Service at 6:30 p.m. Mass of Christian Burial will be 10:00 a.m. Saturday, March 12, 2022, at Holy Cross Parish, St. Michael Catholic Church. Burial will be at Calvary Cemetery. Constance Marie Richou, the daughter of Edward and Gertrude (Geary) Richou was born December 12, 1938, in Sioux City. She grew up in the area and graduated from Heelan High School in 1957. She began working for Northwestern Bell following graduation. She married Gary Morse, they moved to California and had 3 children. The couple later divorced. Connie and the children moved back to Sioux City, she later met Leslie “Bill” Rasmussen Jr. and the couple were married on July 27, 1968, in South Sioux City, NE. She worked for Concrete Pipe Company, Terra Chemicals and then returned to Northwestern Bell, retiring in 1997. She was a member of St. Michael’s Catholic Church, and she also volunteered at the Catholic schools where her daughter was employed as a teacher. Connie loved preparing for and spending the holidays, especially Christmas, with her family. She enjoyed traveling, cooking, crocheting and spending all the time she could with her children, grandchildren and great grandchildren. If you knew Connie, you know she would use her loud high-pitched whistle to get your attention. She is survived by her children, Suzanne (Stuart) Cloud of Sioux City, IA, Julie (Jerry) Norman of Moville, IA, Thad (Tara) Morse of Dakota Dunes, SD; stepdaughter, Tracie (David) Bernhard of Brandon, SD; her brother, Leo Richou of Simi Valley, CA; 12 grandchildren; many great-grandchildren. She is preceded in death by her parents, husband, Bill; brother, John Richou and his wife Patsy; sister-in-law, Dodie Richou; granddaughter, Kathrine Cloud; stepsons, Mark Rasmussen and Brian Rasmussen; and step grandson, Randy Rasmussen.

The family of Constance Marie Rasmussen created this Life Tributes page to make it easy to share your memories.

Send flowers to the Rasmussen family.