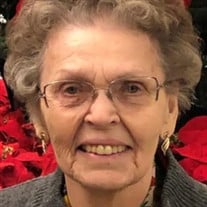 Cleo Fern Brehm, 88, formerly of Sioux City, passed away peacefully on September 15, 2020, at Hillcrest Health in Omaha, NE. A celebration of life service will be held for family and friends 2:00 pm Friday, November 6, 2020, at Christy-Smith Funeral Homes, Morningside Chapel, 1801 Morningside Avenue, with visitation one hour prior. Born and raised in the Dakota County area, she was the third child of Al and Frances Richl. Cleo was a 1949 graduate of South Sioux City High School and lived and worked most of her adult life in the Sioux City area. She married Ed Gurnsey after graduation, and Robin, her only child, came from what was to be a brief union. But later she found the man that would become her ‘forever love’ and in 1960, she married Jack Brehm from Hinton. Their mutual love continued until Jack’s death in 2004 but Cleo never forgot the joy that 44-year marriage brought to her life. Cleo’s family will always remember her unconditional love for each of them and how much they enjoyed her spunky, fun loving personality. She will always be missed. She was preceded in death by her parents, Al Richl and Frances Taggs; husband, Jack Brehm; sister, Darlene Sanford and her husband, John; and brother Tom Richl. Cleo is survived by her daughter, Robin Gurnsey, Sioux City, and a sister-in-law, Eileen Richl, Seattle, WA. She is also survived by nieces, Sandy (Keith) Klug, Omaha and Salli (Dave) Roberts, Seattle; nephews, Terry (Brenda) Sanford, Omaha, Scott (Lori) Sanford, Sacramento CA, Michael (Shirley) Richl, Seattle, and Tom Richl Jr., Seattle. Survivors also include many great nephews and nieces who knew and loved Cleo. The family has requested that memorials be directed to the Siouxland Humane Society.

Cleo Fern Brehm, 88, formerly of Sioux City, passed away peacefully on September 15, 2020, at Hillcrest Health in Omaha, NE. A celebration of life service will be held for family and friends 2:00 pm Friday, November 6, 2020, at Christy-Smith... View Obituary & Service Information

The family of Cleo Fern Brehm created this Life Tributes page to make it easy to share your memories.

Send flowers to the Brehm family.