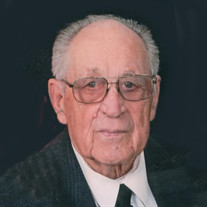 Clayton Frank Ross of Sioux City, IA passed away on Sunday, July 26, 2020, after reaching the age of 92 years old. A funeral will be held at 10:30 a.m., Thursday, July 30, 2020 at Morningside Lutheran Church, 700 S Martha St, Sioux City, IA 51106. A visitation will be held from 4:00-7:00 p.m., Wednesday, July 29, 2020, with family present from 5:30-7:00 p.m., at Christy-Smith Funeral Homes, Morningside Chapel, 1801 Morningside Avenue, Sioux City, IA 51106. Clayton was born on February 6, 1928 in Sioux City, Iowa to John and Helen Ross. While in Central High School he joined the U.S. Navy and upon returning, came back and graduated. Clayton joined the United States Navy on November 15, 1945. He was stationed in Guam. and was honorably discharged in 1947. In 1947 Clayton was a member of the Sioux City 7-Up team as a pitcher. His coach had been a scout for the Yankees and said he had potential for going pro, but sadly a stray ball to his pitching hand derailed that dream. He continued playing throughout his adult life, including on the Morningside Lutheran Church softball team. In June of 1955 he started working for Standard Redi Mix, a concrete company. He had this job for 38 years, before fully retiring 1996. In 1956 he met the love of his life, Jacquetta Marguerite Edwards. They were married on March 23, 1957 in the Morningside Lutheran Church. They lived together for 63 years in their own home. Together they had 4 children, Kathrine, Nancy, Gunnar, and Martha. He joined the Jaycees in the 1950s, enjoyed bowling, soap box derby, was a member of the Civil Defense. Police Reserves in the 1960s, the American Legion, was very involved as a volunteer in church youth basketball. Clayton was a very devout Lutheran and attended the Morningside Lutheran Church where he was a head usher for over 40 years. Clayton is preceded in death by his parents; his brother, Robert Ross; nephew, Randy Ross; and son-in-law, Steve Heffernan. He is survived by his loving wife of 63 years, Jacquetta "Jacky” Ross; children, Kathrine Heffernan, Nancy (Wayne) Hanson, Gunnar Ross, and Martha (Mark) Good; 8 grandchildren; and 10 great-grandchildren; sister, Marlys (James) Halliday; and many nieces, nephews, and extended family.

The family of Clayton Frank Ross created this Life Tributes page to make it easy to share your memories.

Send flowers to the Ross family.