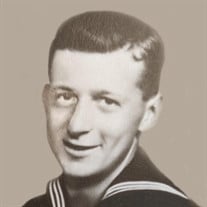 Clair Larson passed away after a thankfully brief struggle with cancer in Sioux City, IA, on April 24, 2021, at the age of 87. A memorial service be 2:00 pm Monday, June 14, 2021, at Christy-Smith Funeral Homes, Morningside Chapel, 1801 Morningside Avenue, with visitation one hour prior. Born July 4th, 1933, in Ayrshire, IA, into a farming family, he graduated from high school in 1951 and enlisted in the U.S. Navy shortly after. Clair married his high school sweetheart and love of his life, Glenice Rustan, on July 16th, 1952, and served honorably aboard the USS PHILIPPINE SEA (CVA47) as an Aviation Machinists Mate maintaining F4U Corsairs supporting operations against North Korea during the Korean War, and at Naval Air Station, Corpus Christi, TX, before moving his family to Des Moines, IA, where he remained in the Naval Air Reserve until 1962. Initially a meatcutter, Clair trained as an electronics technician and worked for Sears Roebuck in Des Moines, IA, at night in their electronics repair shop, before joining the company permanently. He rose through the ranks to become the manager of the Sears Roebuck service and maintenance department at stores in Mankato, MN, and Sioux City, IA, retiring after 32 years of service. He then worked for Michaels Arts and Crafts in their framing shop for 18 years before finally retiring for good at the age of 80. Clair was a truly good man, whose word was his word and whose handshake meant relationship. He lived a life and treated people in such a way that those who were associated with him stayed in his orbit and remained friends for decades. He served his country with pride, executed all of his jobs to the utmost of his ability, and firmly adhered to a philosophy of doing what was right, even if it was painful. He was a mechanical and electrical genius who could fix anything, from cars to TVs to plumbing, and who was regularly asked for help by his friends. He loved to fish, read and watch military history, and do crossword puzzles. Most importantly, he instilled in his children the same values, drive, and conscience. He is survived by his son, Steve Larson (Linda); daughters, Jodi Maxey (Rolle) and Kristi Schulte (TJ); grandchildren, Nathan Maxey, Jeremy Larson (Catherine), Megan Johnson (Shawn), Rebecca Stockwell-Larson (Jamie), Larissa Larson, and Theo and Emmett Schulte; and great-grandchildren, Wes and Nell Johnson, and Sam Larson. Clair was preceded in death by Glenice in 2011; by his four siblings – Paul, Bessie, Mike, and Ruth; and by his youngest son, Kevin Douglas. In lieu of flowers, please send a memorial donation to St. Jude Children’s Hospital.

Clair Larson passed away after a thankfully brief struggle with cancer in Sioux City, IA, on April 24, 2021, at the age of 87. A memorial service be 2:00 pm Monday, June 14, 2021, at Christy-Smith Funeral Homes, Morningside Chapel, 1801... View Obituary & Service Information

The family of Clair D. Larson created this Life Tributes page to make it easy to share your memories.

Clair Larson passed away after a thankfully brief struggle with...

Send flowers to the Larson family.