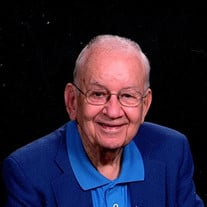 Charles R. “Chuck” LeMaster, 92, of Sergeant Bluff, died Friday, Aug. 30, 2019, at Pioneer Valley Living and Rehab in Sergeant Bluff. Services will be 11 a.m. Wednesday at Christy-Smith Funeral Homes, Morningside Chapel, with visitation one hour prior. Burial will be in Graceland Park Cemetery. Online condolences can be made to the family at www.christysmith.com. Charles LeMaster was born on April 4, 1927, in Sioux City, the son of Charles and Grace (Sutton) LeMaster. He attended Hawthorne Elementary and graduated from Leeds Senior High School. He attended San Diego State College in California and received his bachelor of arts degree at Morningside College. He then received his MLS degree from Western Michigan University at Kalamazoo, Mich. Charles married Clarice Annelle Sommers on Aug. 12, 1955, at Oakland, Neb. He was employed at Iowa Public Service in Sioux City for eight years, and was a salesman for the John Hancock Life Insurance Company in San Diego, Calif., for several years. He taught at Woodrow Wilson Junior High in Sioux City. In 1964, he began his employment at the Morningside College Library. He served as Director of Library Services there until taking an early retirement in 1989. He came out of retirement in 1990 and worked part-time at the Western Iowa Tech Library for another 27 years, retiring in September 2014 at the age of 87. In 1989, Charles was honored as a recipient of the Order of Morningside at Morningside College. He was a member of the Sioux City Retired Educators Association and Grace United Methodist Church. Survivors include a son and his wife, C. Arthur and Joan LeMaster of Highlands Ranch, Colo.; grandson, Bryan LeMaster of Denver, Colo.; a daughter and her husband, Annelle and Kevin Finstad of Wyoming, Minn.; a daughter and her husband, Amy and Keith Oliver of Sergeant Bluff; granddaughters, Abby and Devon Rook, Erin Oliver and Drew Baker. Also, he is survived by special friend, Lois Harward. He was preceded in death by his parents; wife, Clarice; and his brothers. In lieu of flowers, the family encourages donations to Hospice of Siouxland or the charity of your choice.

The family of Charles Raymond LeMaster Jr. created this Life Tributes page to make it easy to share your memories.

Send flowers to the LeMaster family.