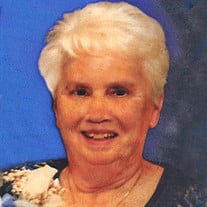 Charlene Williams, 88, died Friday, October 18, 2019 at her residence in Sioux City. A visitation will be 3:00-7:00 p.m., Monday, October 21, 2019 at Christy-Smith Funeral Homes Morningside Chapel with the family present 5:00-7:00 p.m. Funeral service will be 11:00 a.m., Tuesday, October 22, 2019, at Morningside Lutheran Church with Pastor Tom LoVan officiating. A burial will take place at Memorial Park Cemetery. Charlene Marie Warner, the daughter of Paul and Nelly (McLane) Warner, was born February 26, 1931 in Worthington, MN. She grew up in Estherville, IA before moving to Sioux City where she attended Central High School. On October 7, 1951 Charlene was united in marriage with James Williams. The couple moved to California where they lived for 35 years. Charlene was a homemaker while her children were growing up and very involved as a mother. She later began working as a manager at Lane Bryant and Sears. Charlene was a member of Morningside Lutheran Church. She enjoyed baking and spending time with her grandchildren and great-grandchildren. She was a mentor and assisted nine students through confirmation. Charlene was a wonderful wife, mother, grandmother, and friend. Charlene is survived by her husband, James Williams; two daughters, Linda Stone and Terry Fein; four grandchildren, Shawna (Wayne) Maaske, Shea Williams (Danielle Lawler), Mariah Fein, James Fein; seven great-grandchildren, one great-great-grandchild, brother, Butch Warner; two sisters, Judy Lucart and Virginia Pieslak. She is preceded in death by her parents and two sisters.

The family of Charlene M. Williams created this Life Tributes page to make it easy to share your memories.