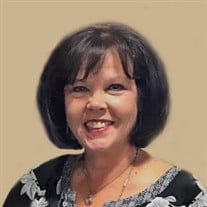 Carol Lynn Yaneff, age 65, of Sioux City died Wednesday September 25, 2019 at her residence surrounded by her loving family and friends, under the care of Hospice of Siouxland. Mass of Christian Burial will be held at 10:30am Friday October 4, 2019 at Mater-Dei Parish, Immaculate Conception Church with burial following in Floyd Cemetery. Visitation with the family present will be from 5:00-7:00pm Thursday with a Prayer Service held at 7:00pm at Grace United Methodist Church. The family requests the attendees wear something green to both the visitation and funeral service in honor of Carol’s Courageous battle against liver cancer. Morningside Chapel Christy Smith Funeral Homes is handling of arrangements. Carol was born in Sioux Falls, South Dakota on October 6, 1953, the daughter of William “Bill” and Minnie (Kelderman) Keizer. She graduated from West Lyon Community Schools in 1971. She attended Stewart School of Beauty in Sioux Falls, SD, graduating in 1972. She worked for 8 years as a cosmetologist in the Rock Valley area before coming to Sioux City in 1980. Carol continued to provide her personal touch for 47 years to her clients in the Siouxland area. She spent the last 24 years at The Hair Parlour. Carol received a special endorsement from the Iowa Department of Education, and started her 30 years of service with the Sioux City Community Schools District. She taught students at Riverside Elementary School and then transferred to East Middle School for the next 24 years before retiring in May of 2019. She was united in marriage with John Yaneff on August 16, 1997 in Sioux City. Carol was a member of Grace United Methodist Church. She loved playing golf, attended concerts and Sioux City Explorers games. She was a HUGE fan of the Chicago Cubs and Minnesota Vikings. She had a deep love for her pets. Carol loved to cook and entertain family members and friends. She enjoyed traveling overseas. Carol traveled to Ireland multiple times with John and their friends. Carol had special traveling partners, Bobbie and John Pylelo. She is grateful of their friendship and love they shared. Carol had a great relationship with her siblings and she will be deeply be missed by them. Carol had a very strong bond with her sister Linda, where they did everything together. Carol liked to call her sister Lin. Carol’s life and memory will always be remembered by her loving husband of 22 years John; their children, Karey Yaneff, Kim Yaneff Wyant and her husband Terry, Katie Yaneff Williams, Paul John Yaneff and his wife Kristin, and Kristin Yaneff; her 13 wonderful grandchildren; brothers, Glen and Rod Keizer; and sister, Linda Keizer. She was preceded in death by her parents. The family wishes to extend a special Thanks to the providers and staff of Hospice of Siouxland, June E. Nylen Cancer Center and the University of Nebraska Medical Center in Omaha for the wonderful care and support that was provided to Carol and her family. In Lieu of flowers the family requests that memorials in Carol’s name be made to Grace United Methodist Church or Mater-Dei Parish.

Carol Lynn Yaneff, age 65, of Sioux City died Wednesday September 25, 2019 at her residence surrounded by her loving family and friends, under the care of Hospice of Siouxland. Mass of Christian Burial will be held at 10:30am Friday... View Obituary & Service Information

The family of Carol L. Yaneff created this Life Tributes page to make it easy to share your memories.

Send flowers to the Yaneff family.