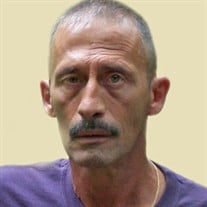 Bradley F. Johns, 60, passed surrounded by his family, Saturday, June 6, 2020, at his residence in Sioux City, IA. A memorial service be 2:00 pm Friday, June 12, 2020, at Christy-Smith Funeral Homes, Larkin Chapel, 2320 Outer Drive North, with visitation one hour prior. Burial will follow in Logan Park Cemetery. Bradley F. Johns, the son of Arthur and Barbara (Riggs) Johns was born October 30, 1959, in Sioux City. He attended West High School. Bradley then served in the U.S. Marine Corps. On July 9, 1977, Bradley was united in marriage with Lori Gordon in Elk Point, SD. Bradley was primarily a carpenter. He was a licensed contractor and subcontractor and was always keeping busy. From hanging siding to rebuilding decks, there was always a project to be done, especially if it was outdoors. He was also proud of his welding skills. Bradley was also the Hot Beverage Manager at Coffee King. He truly was a “Jack-of-all-Trades”. Bradley was a member of the Homebuilder’s Association. He enjoyed hunting and fishing but spending time with his family was his greatest love. Bradley liked everything about cars and motorcycles, and enjoyed watching the Green Bay Packers play. Bradley is survived by his wife, Lori of Sioux City; sons, Heath (Erin) of McCook Lake, SD, Damen of Sioux City, Kai of Sioux City; grandchildren, Chase (Matti Darrow) Johns, Caleb June, Carter Johns, Riley Johns; his mother, Barb Rohde of Fremont, NE; a sister, Carla Johns of Fremont; and many other relatives and friends. He was preceded in death by his father and a sister, Da Nel Johns. In lieu of flowers, the family has requested memorials to help defray the cost of his final illness.

The family of Bradley F. Johns created this Life Tributes page to make it easy to share your memories.

Send flowers to the Johns family.