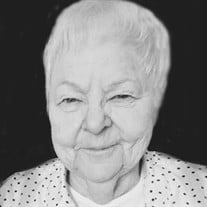 Bonnie Ruth Shumansky, age 81, of Sioux City died Sunday September 16, 2018 at a local hospital. Funeral services will be held at 10:00 a.m. Thursday September 20, 2018 at Redeemer Lutheran Church with burial following in Memorial Park Cemetery. Visitation will be held on Wednesday from 4:00-8:00 p.m. with the family present 6:00-8:00 p.m. and a Prayer Service at 7:30 p.m. at Morningside Chapel Christy-Smith Funeral Homes. Bonnie was born in Sioux City, Iowa on July 6, 1937, the daughter of Jess and Violet (Piper) Copple, She attended Sioux City Public Schools and graduated from Central High School with the class of 1955. She was united in marriage with Alex Shumansky on June 2, 1957 in Sioux City. Alex preceded her in death in 1996 in Sioux City. She was a lifelong resident of Sioux City who worked for Northwestern Bell Telephone Company first as an operator, then as an administrative assistant until her retirement in 1995. Bonnie was a member of Redeemer Lutheran Church. She loved to cook for her family always making sure she sent food home with them at the end of their mealtime. She cherished the time she could spend with her family, especially her grandchildren. She is survived by her sons: Scott and his wife La Donna and Todd and his wife Tara both of Sioux City. She is also survived by her 8 grandchildren: Morgan Thieman and her husband Chris, Michelle, Meg, Bryan, Austin, Jace, Aubrey, and Mason. She is also survived by her two sisters: Shirley Santee of Springfield, NE., and Marilyn De Wolf of Council Bluffs, IA., and a daughter-in-law Sara Shumansky. Bonnie was preceded in death by her parents, her husband Alex, her son Alex, and two brothers: Jace and Howard. “And Pumpkin Pie will never be the same”.

The family of Bonnie Ruth Shumansky created this Life Tributes page to make it easy to share your memories.

Send flowers to the Shumansky family.