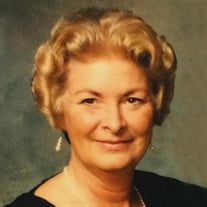 Beverley Cosgrove, 81, lifelong resident of Sioux City, Iowa died on Saturday, October 23, 2021, at Unity Point Health St. Luke’s in Sioux City, Iowa. A funeral service will be at 10:30 a.m. on Friday, October 29, 2021, at Blessed Sacrament Catholic Church of the Holy Cross Parish at 3012 Jackson St., Sioux City, Iowa, with the Reverend Jerome Cosgrove officiating and Reverend Frank Parrinello assisting in choir. Interment will be in Calvary Cemetery. Friends and family are welcome to gather at the church one hour prior to the service. Bev was born September 19, 1940, in Sioux City, Iowa, to Harold and Martha (Junkers) George. She grew up in Sioux City and graduated from Bishop Heelan Catholic High School in 1958. Bev worked for Doctors Wiedemeier and Youngblade prior to marrying James Cosgrove on November 27, 1965, at St. Joseph's Catholic Church in Sioux City. The couple started their family and had two sons, Daniel and Steven. Bev stayed home while the boys were young. She returned to work for the Heelan athletic department in the 1980s and later worked at the Long Lines Family Rec Center. She enjoyed playing bridge and spending time with family, especially her grandchildren and nieces and nephews. Those left to cherish her memory include her husband James Cosgrove of Sioux City; sons Daniel (Laurie) Cosgrove and their children Connor, Kellen, and Katie of Urbandale, Iowa, and Steven (Renee) Cosgrove and their children Liam and Oban of Minneapolis, Minnesota; sister Carole (Joseph) Parrinello of Sioux City; sister in-law Barbara George of Farmington, Minnesota along with numerous nieces and nephews. She was preceded in death by her parents Harold and Martha George, and brother Dennis George. Online condolences may be made to the family at www.christysmith.com

The family of Beverley A. Cosgrove created this Life Tributes page to make it easy to share your memories.

Send flowers to the Cosgrove family.