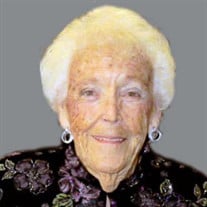 Betty Marie Law, 95, of Lawton passed away with her family around her on Monday, May 3, 2021. A Memorial Service will be held Saturday, May 8, at 11:00 a.m., with family present at 10:00 a.m. at Christy-Smith Funeral Home, Morningside Chapel, 1801 Morningside Avenue, Sioux City. A burial will follow at Banner Township Cemetery in Lawton, IA. Visitation will be held from 10:00 to 11:00 prior to the service. Betty was born February 8, 1926 in Sioux City, to William and Florence (Olsen) Haney. Betty grew up with family in South Sioux City, NE and Sioux City, IA. She graduated from Central High School in Sioux City. Betty married Frank Chapman Law on April 16, 1944. After Frank returned from his service with the Marines in WW2, they started married life together on a Lawton farm. Betty and Frank lived at three state parks where Frank was a State Park Conservation Officer: Stone, Maquoketa, and Backbone State Parks. They settled back in Lawton in 1957, where together they raised their three sons, Rich, Ron, and Tom. Betty was a member of Community Presbyterian Church where she shared her talents and joyfully sang in the choir. She worked at Metz Bakery when her boys were young and later she had a career of over 20 years as custodian and student support at Lawton Bronson Community School. She worked with Frank to keep the school clean and running smoothly. Betty was a second mom to many school kids, always looking out for their needs. Frank and Betty retired together in 1988 and spent many years enjoying life with family and friends. They faithfully attended their grandchildren's and great-grandchildren's events. They loved camping, fishing, and traveling. Betty was known to: catch the most fish, catch the most sun rays, win the most card games, feed the most birds, wear the most glitter and bling, put on the Ritz dancing with the Grannys and Grandpas, and spoil her cat Precious. Family was everything to “Grandma Honey”. Betty always wanted to be sure everyone around her was comfortable. She lived to serve others. Betty's memory will be cherished by all. Betty is survived by her son, Richard (Patricia) Law; granddaughter, Michelle (Steve) Heide; great-granddaughter, Ashleigh (Cody) Wiltgen; and great-great-grandson, Aubin; son, Ronald (Laurie) Law; grandson, Christopher (Kristi) Law; great-grandchildren, Bodhi and Gwen; granddaughter, Tonia (John) Mosley; great-grandchildren, Grace, Eliza, and Micah; granddaughter, Alyssa (John) Gardner; great-granddaughters, Betty and Amelia; grandson, Jared (Kelly) Law; great-granddaughters, Hadley and Emma; son, Thomas (Tara) Law; grandson, Travis Law (Nikki); great-grandson, Wyatt; granddaughter, Tabetha (Jason) Boatwright; great-granddaughters, Tianna and Ashland; three honorary daughters/nieces, LaRae Luettgen, Kris Weber, and Patty Hegstrom. We are comforted to know that Betty is now reunited with her beloved husband, Frank; parents and grandparents; brother and sister-in-law, Robert and Marley Haney; special cousins and partners in fun, Leo “Rick” Rickwa and Lola Anderson; along with other loved relatives and friends who have passed before her.

Betty Marie Law, 95, of Lawton passed away with her family around her on Monday, May 3, 2021. A Memorial Service will be held Saturday, May 8, at 11:00 a.m., with family present at 10:00 a.m. at Christy-Smith Funeral Home, Morningside... View Obituary & Service Information

The family of Betty M. Law created this Life Tributes page to make it easy to share your memories.

Betty Marie Law, 95, of Lawton passed away with her family around...

Send flowers to the Law family.