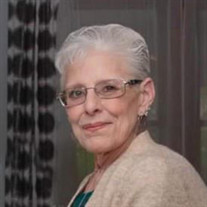 Beth Banks, 62, died Monday, February 7, 2022, at Countryside Nursing and Rehab in Sioux City, IA. A memorial service will be 11:00 am Saturday February 12, 2022, at Calvary Lutheran Church in Leeds, with visitation one hour prior. Christy-Smith Funeral Homes, Larkin Chapel, is assisting the family with arrangements. Beth Ranae (Roskam) Banks was born February 18, 1959, in Sioux Center, Iowa, the oldest of Leonard and Harriet (Van Ravenhorst) Roskam's seven children. She attended West Sioux Community Schools until the family relocated to Union County, South Dakota, where she attended Hudson Schools, graduating in 1977. While in school, Beth participated in band and choir, and was a member of the All-State Honor Choir her senior year, as well as participating in several sports. On February 5, 1982, Beth married Kenneth Banks at the Minnehaha County Courthouse in Sioux Falls. They settled first in Alcester, SD, before living in Denver, CO and eventually Pascagoula, MS where their oldest child, Brittany Leigh was born in 1989. Beth, Ken, and Brittany returned to the Midwest in 1992, where they made their home in Sioux City. In 1995, they welcomed their second child, Colin Arthur. Over the next several years, Beth resided in Sioux City, Omaha, Canton, Great Bend, KS, Ames, IA, and Sioux Falls before returning to Sioux City in 2012. Beth worked in several areas over the years, including as a CNA, a daycare aide, and her most-loved position as assistant manager at the Murphy USA station on Floyd Boulevard. Beth was a talented musician and studied piano and organ from an early age. Her greatest joy was being able to play for the weddings of three of her siblings, as well as two nieces and a nephew, in addition to many other family members and friends over the years. In 2014 Beth joined the staff of Calvary Lutheran Church in Leeds as organist, a post in which she served until health issues forced her to resign in early 2017. Beth is survived by her husband, Ken; daughter Brittany (Brandon) Wineinger of Council Bluffs, IA; son Colin (Charlotte Peterson) of Sioux City; two grandchildren, Emilia Wineinger and Cyrus Banks; her mother Harriet Roskam, Canton, SD; sisters Ruth (Rick) Miller, Sioux Falls; Laura (Neil) Warner, Larchwood, IA; Leah (Jason) Theisen, Valley Springs, SD; brother Alan, Glenburn, ND; sisters-in-law Teri (Randy) Mevius, Sioux City; Michelle (Mike) Ingebrigtson, Canton; Melinda Talbot, Portland, OR; 14 nieces and nephews, and 13 great-nieces and nephews. She is also missed by her beloved kitties, Johnny and Felix, as well as "grand-furbabies" Hamilton, Duke, Nova, Miles, Exo, and Bino. Beth was preceded in death by her father Leonard Roskam, parents-in-law Jim Banks and Ruth Guidroz, brothers Daryl and Darwin Roskam, and brother-in-law Timothy Banks. In lieu of flowers, the family has set up a GoFundMe to help with final expenses, which can be found at https://gofund.me/ea010d80.

Beth Banks, 62, died Monday, February 7, 2022, at Countryside Nursing and Rehab in Sioux City, IA. A memorial service will be 11:00 am Saturday February 12, 2022, at Calvary Lutheran Church in Leeds, with visitation one hour prior.... View Obituary & Service Information

The family of Beth Ranae Banks created this Life Tributes page to make it easy to share your memories.

Send flowers to the Banks family.