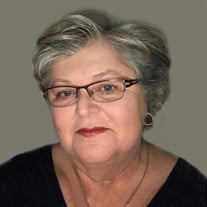 Becky A. Amick, 64, died Wednesday, March 11, 2020, at Pioneer Valley Living and Rehab. A visitation will be 4:00 pm to 6:00 pm Sunday, March 15, 2020, at Christy-Smith Funeral Homes, Morningside Chapel, 1801 Morningside Ave. A funeral service will be 11:00 am Monday, March 16, 2020, at Christy-Smith Funeral Homes, Morningside, with burial in Memorial Park Cemetery. Becky Ann Pithan, the daughter of George and Dorothy “Jo Ann” (Will) Pithan was born June 16, 1955, in Sioux City, IA. She was in the first graduating class of West High School in 1973. Becky then went to work in the Sunshine Bakery. In June of 1973, Becky was united in marriage with Randy Amick in Sioux City. She was employed as a Jailer at the Woodbury County jail. Their son, Chris, was born in 1974. The couple divorced in 1986. In 1989, Becky moved to Kimberling City, MO and worked for MCI in Springfield, MO as a security officer. She was later promoted to Supervisor. After moving back to Sioux City, Becky was employed at Williams and Company in licensure. Becky enjoyed baking and gardening. Becky is survived by her son, Chris (Stephanie) Amick of Bronson, IA; two grandchildren, Nellie and Abby Amick of Sioux City; her parents, George and Jo Ann; an honorary son, Andrew (Jesus Ojeda) Amick of Sioux City; brothers, Joe (Carol) Pithan of Sloan, IA, Merle (Terri) Pithan of Sioux City; and many other relatives and friends. She was preceded in death by an infant brother, Robert.

The family of Becky Ann Amick created this Life Tributes page to make it easy to share your memories.

Send flowers to the Amick family.