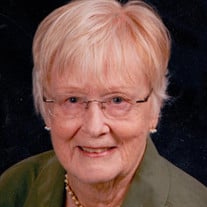 Barbara Lucille Raymond, 83, of La Crosse, formerly of Sioux City, passed away Wednesday, Aug. 8, 2018. A celebration of Barbara’s life will be 11 a.m. Saturday at Faith United Presbyterian Church in Sioux City. Arrangements are under the direction of Morningside Chapel, Christy-Smith Funeral Homes. Online condolences can be left at www.christysmith.com. Barbara was born on Oct. 29, 1934, in West Allis, Wis. She graduated from Central High School in West Allis and then attended Luther College in Decorah, Iowa. While working at Wisconsin Electric Power Company, she met Richard Raymond. They married on Dec. 17, 1955. Over the years, Barb and Dick lived in a number of different communities throughout Iowa, Minnesota and Nebraska, most of those years in the Sioux City area, where they raised their four children. Barb was a stay at home mom while raising her kids and helping Dick with his business. Once the children were older, Barb began working as a secretary at East High School, 3M Corporation and Hormel Foods, before her retirement. Barb volunteered many hours at Third Presbyterian Church, serving on several boards and participating in other church work. The Raymond home was a place where friends and family gathered often over the years to celebrate special occasions, as Barb thoroughly enjoyed hosting these events. Barb loved her summers on Lake of the Woods where family and friends were always welcome, as well. From Milwaukee, to Hibbing, to Lincoln, to Sioux City, to Woodbury, to Austin, to Worthington, and finally back to Wisconsin, Barbara made many friends in whom she found lifelong companions. She loved her family dearly, held close to her friends and brought joy to the lives of all. Barbara is survived by her husband, Richard of Worthington, Minn.; a sister, Sandra Simon of Dousman, Wis.; her children, Stephen Raymond of Eden Prairie, Minn., Karen (Dave) Skog of Worthington, and Sarah Raymond of Mount Pleasant, Iowa; grandchildren, Rachel (Gregory) Gray, Jordan (Kristine) Skog, Emily (Andrew) Vaske, Stephen Skog, and Timothy Skog; and great-grandchildren, Madelyn, Max and Bobby Gray, and Elisabeth, Sophia and Vera Skog. She was preceded in death by her parents, Stephen and Vera Kells; a sister, Helen Kells; and a daughter, Nancy Foster.

The family of Barbara L. Raymond created this Life Tributes page to make it easy to share your memories.

Send flowers to the Raymond family.