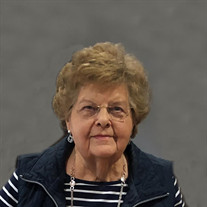 Barbara D. Oehlerking, 93, of Sergeant Bluff, Iowa, passed away on April 19, 2022, after several months of declining health. During this time she was surrounded by her family and welcomed visits and calls by friends. A visitation and short prayer service will be held at the Sergeant Bluff Community United Methodist Church, 101 Baker Drive in Sergeant Bluff on Friday, April 22. Visitation will be from 5:00-7:00 PM. with a Prayer Service at 7:00 PM. Funeral services will be held at 10:00 AM on Saturday, April 23, at Community United Methodist Church followed by internment at Graceland Cemetery in Sioux City. Online condolences may be left for family at www.christysmith.com Barbara was born to Fritz and Flossie (Pope) Henry of Sloan, Iowa, on May 12, 1928. She had three siblings, Judson (Shirley) Henry; Marilyn (Gerald) Alfredson and Richard (Francis) Henry. The family grew up on the family farm near Sloan. After graduating from Sloan High School, she started her career at a local Quaker Oats grain elevator where she managed transactions, tracked grain pricing and helped to ensure the accuracy of grain inventories. Barbara married Charles H. Oehlerking of Sergeant Bluff, Iowa, on January 25, 1950. They lived on the Oehlerking family farm for the 72 years of their marriage, where they raised four children: Mark (Susan) of Clive, IA; Tom (Mary Anne) of Sergeant Bluff, IA; Cindy (Monte) Wagner of Wilmington, NC; and Jon (Lori) of Sergeant Bluff. Barbara, like her mother, was a member of Eastern Star for over 75 years, and was active in the Faith Circle group and Lavender Ladies at the Sgt. Bluff Community United Methodist Church. Barbara was instrumental in the growth and success of the family farming and business operation. She and Charles were true partners. She provided insights on all major decisions, managed the financial records, raised four children and cooked hundreds of meals for the farm crews. Barb and Charlie started Oehlerking Fertilizer in the early 1960’s. She could often be found delivering liquid fertilizer to local customers with all the kids in tow. Barb was involved in various school activities for her children, including Room Mother, Cub Scout den mother, and of course chauffer. For over 70 years, Barbara looked forward to playing cards and catching up with good friends at the monthly “Merry Mom’s Club.” In later years, she and Charlie enjoyed meeting with groups of friends at McDonalds for coffee multiple times a week. Barb and Charles enjoyed traveling to see new places and to visit the children and grandkids, especially when a good shopping mall was nearby. One her most cherished roles was as Nana to 11 grandkids and 9 great-grandkids. Whether it was on FaceTime or in-person, she lit up when the grandchildren and great-grandkids were around. Barb was preceded in death by her parents Fritz and Flossie Henry, In-Laws Charles A. and Dora L. Oehlerking, son Thomas Oehlerking, brother Judson Henry, sisters-in-law Francis Henry, Shirley Henry and Gladys Ellery, and brothers-in-law Gerald Alfredson and Jim Ellery. Memorials in Barbara’s memory may be made to the American Kidney Fund.

Barbara D. Oehlerking, 93, of Sergeant Bluff, Iowa, passed away on April 19, 2022, after several months of declining health. During this time she was surrounded by her family and welcomed visits and calls by friends. A visitation... View Obituary & Service Information

The family of Barbara "Barb" Delores Oehlerking created this Life Tributes page to make it easy to share your memories.

Send flowers to the Oehlerking family.