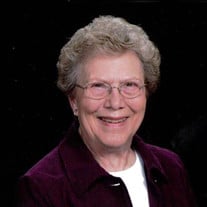 Avis S. Hefner, 89, died December 12, 2021 at Sunrise Retirement Community following a short illness. Funeral service will be at 11:00 AM on Monday, December 20 at Morningside Lutheran Church, 700 South Martha with Pastor Tom Lovan officiating. Visitation will be 9:00 – 11:00 AM on Monday, December 20 prior to funeral. Burial will be at Lawn Ridge Cemetery in Coleridge, Nebraska. Avis was born June 14, 1932 in Coleridge, Nebraska, to William and Katherine (Bohlken) Willms. She grew up on her family farm in Coleridge and in 1949 graduated from Coleridge High School. On November 26, 1950, she married Wendel H. Hefner at Immanuel Lutheran Church in Coleridge. They started their married life on a farm near Coleridge. Around 1954 they moved to Sioux City where Wendel started his career with Postal Finance. They lived in Lincoln and Omaha and returned to Sioux City in 1968, where they maintained their home and shared their life together until Wendel's death in 2002. Avis was a long-time member of Morningside Lutheran Church. During their marriage, Wendel and Avis had five children. Avis was the epitome of a loving wife, mother, grandmother and great-grandmother. She was known for her baking, including cookies, dinner rolls and cinnamon rolls. She reveled in having extended family in her home for holiday dinners and other occasions, often preparing holiday meals for 35 or more family members. Avis was an avid reader; her home contained hundreds of books, many of which were gifts from her family. She was a member of Red Hats and participated in the Lifelong Learning Program at Western Iowa Tech. Avis and Wendel enjoyed traveling, spending extended winter vacations in Arizona. Avis loved traveling to Hawaii. After Wendel's death, Avis enjoyed traveling around the country with friends and cruised to Columbia and the Panama Canal. But above all, Avis cherished spending time with her children, grandchildren and great-grandchildren. Avis is survived by her children, Christine (Anders) Christensen of Minneapolis, Minnesota, Rebecca (Robert) Nelson of Sioux City, Michael (Nancy) Hefner of Johnston, Iowa, Deborah (Shelby) Johnstone of Sioux City and Andrew Hefner of Johnston, Iowa; her grandchildren, Rachel Hollender (Travis Gerhke), William (Chelsea) Hollender, Peter (Kelsi Ustipak) Hollender and Charles (Jocelyn Wolff) Hollender; Katie (Rob) Towler and Aimee (Cole) Hoff; Angela (Doug) Owen, Patti (Chad) Baker, David (Alex) Hefner, and Greg Hefner; Christopher Johnstone, Nick Johnstone, and Ryan Johnstone; 16 great-grandchildren and another great-grandchild on the way. She is also survived by her sister, Carol Hefner of Coleridge, Nebraska, two sisters-in-law, Kay Hefner and Janice Hefner, both of Coleridge; two brothers-in­ law, Wendel Hahne ofNorfolk, Nebraska and Nile Johnson of Blair, Nebraska. She was preceded in death by her parents, her sister, Linda Johnson, and her husband Wendel, her parents-in-law, two sisters-in-law and five brothers-in-law. Avis was truly the tie that bound her family together and she will be deeply missed. Memorials may be sent to Immanuel Lutheran Church in Coleridge, Nebraska, Morningside Lutheran Church, Hospice of Siouxland and Sunrise Retirement Community.

The family of Avis Sue Hefner created this Life Tributes page to make it easy to share your memories.

Send flowers to the Hefner family.