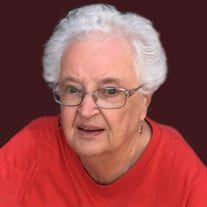 Ava M. Lewon, 82, of Bronson, died Friday, May 17, 2019, at a Sioux City hospital. Service will be 10:30 a.m. Thursday at Elliott Creek Presbyterian Church in Bronson. Burial will be in Memorial Park Cemetery, Sioux City, followed by a lunch in the church basement. Visitation will be 4 to 7 p.m. Wednesday, with the family present 5 to 7 p.m., and a prayer service at 7 p.m., at Morningside Chapel, Christy-Smith Funeral Homes. Ava Marie Smith, the daughter of Noah and Violet (Brown) Smith, was born Oct. 30, 1936, in Bronson, Iowa. She graduated from Bronson High School in 1951. On Dec. 9, 1956, Ava was united in marriage with William "Bill" Lewon in Bronson. She worked as a cook at the elementary school in Bronson for many, many years, retiring in 2000. Ava was town clerk for Bronson and then mayor for over 30 years. She was also the clerk for Floyd Township. Bill died May 28, 2013. Ava was a very active member of Elliott Creek Presbyterian Church. She served as a Sunday school teacher, Sunday school superintendent and was on the Session. She enjoyed sewing, knitting, baking, and crocheting. Ava was known for her baking skills, especially her cinnamon rolls. She loved working at the church booth at the County Fair and later making the pies for the fair. Ava is survived by her children, Julie (Jim) Lura of Austin, Minn., Ron (Karen) Lewon of Bronson, and Gary Lewon of Bronson; five grandchildren; two great-grandchildren; a sister, Dorothy Fiala of Sioux City; and many other relatives and friends. She was preceded in death by her parents; husband; two sisters; and six brothers.

The family of Ava M. Lewon created this Life Tributes page to make it easy to share your memories.

Send flowers to the Lewon family.